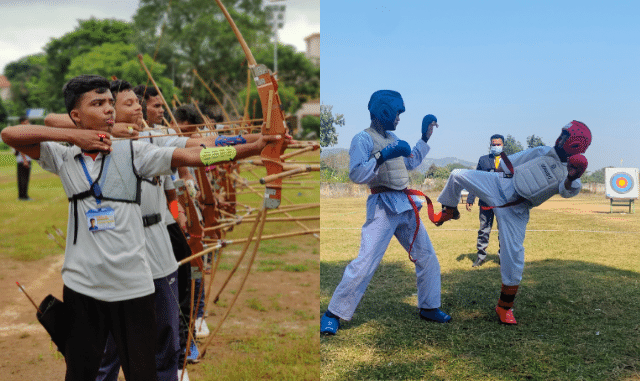 Lanjigarh: Vedanta Limited, Lanjigarh unit, India’s premier producer of metallurgical grade alumina, pledges to strengthen grassroots sporting culture on Kids Athletics Day by supporting young athletes from local communities. Placing holistic development of communities at the core of its operational philosophy, Vedanta Lanjigarh runs several socio-economic developmental projects in the region. Presently, over 100 students are undergoing training in Archery and 80 students are undergoing training in Karate, at the DAV Vedanta International School and the SSD High School in Lanjigarh. They receive training from full-time coaches as per designated timetables.

Observed by the member bodies of World Athletics, the organization in charge of governing the field of athletics worldwide, the Kids Athletics Day seeks to globally reiterate the belief that every child enjoys the right to move and play, and it is, therefore, their fundamental right to have access to sport.

Vedanta’s sports trainings have brought plaudits for Lanjigarh’s youth, with many of them winning medals at the National and State-level. Till date, the Archery students have brought home 4 gold medals, 8 silver medals and 4 bronze medals from national and state-level competitions. Two students, Simanchal Kadraka and Ratna Majhi, recently participated at the Archery Senior Nationals Competition held in Jammu and Kashmir. Students from the Karate coaching classes have also together won gold, silver, and bronze medals at the national level.

Speaking about the program, Mr. GG Pal, Dy. CEO, Vedanta Limited, Lanjigarh, said, “Sustainable development can only be successful if we empower our future generations with the tools needed to develop their innate potential. Every child must be given the opportunity to express themselves and build skills through sports and athletics. Our development initiatives seek to help budding athletes within our neighboring communities explore the wonderful world of sport and in the process show their peers that hard work and discipline can open new frontiers.”

Vedanta Aluminium Business, a division of Vedanta Limited, is India’s largest manufacturer of aluminium, producing half of India’s aluminium i.e., 2.26 million tonnes in FY22. It is a leader in value-added aluminium products that find critical applications in core industries. The company operates a 2 MTPA (million tonnes per annum) capacity alumina refinery in Lanjigarh (Kalahandi district, Odisha), India since 2007 and an associated 90 MW captive power plant.  With its world-class aluminium smelters, alumina refinery and power plants in India, the company fulfils its mission of spurring emerging applications of aluminium as the ‘Metal of the Future’ for a greener tomorrow.