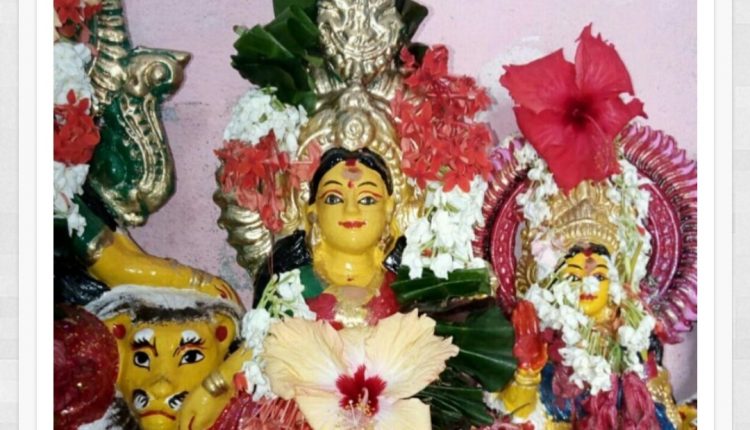 Bhubaneswar: Khudurukuni Osha or Bhalukuni Osha (fast) is month-long pomp and show. On the month of Bhadraba (Aug-Sept) after the Gabha Purnima the young girls fast and worship Maa Mangala on Sundays.

A set of rituals involving offerings to the Goddess Mangala spread over weeks marks Khudurukuni Osha that is steeped in the maritime trade history of the state.

It also comes with a mythology of Ta’poi, the story of a young woman who faced torture at the hands of her sisters-in-law when her brothers were away in South Eastern countries for trade. When Ta’poi worships Goddess Mangala, it is the divine intervention which sees her misery alleviated.

The rituals begin from the dusk till the dawn. The unmarried girls of the same neighbourhood gather together at a “Kothi”. With the devotedness, these ladies make a garland of flowers specifically hibiscus/mandaar. With various decors like alpana , jhoti , colours and flowers they make the Kothi (where they would be praying) beautiful.

In the devotion, the girls carry a “brata” (a knotted white thread coloured with turmeric) and Dubapauda (a tiny bouquet of grass flowers, whole raw rice, tied in a hibiscus leaf) with her and tie it to her arm after the completion of the puja and stay there till the last session of the puja. This gang goes to a nearby water body and pray to the sun. Small mounds of clay or sand with aparanga sticks are made and decorated with turmeric (haldi) and vermillion (sindura) and many flowers. These little heaps are called Bhalukas and are offered with “ukhuda” and “khuda” with ripe banana. This ritual of worshiping the Bhalukas made them name the festival to Bhalukuni Osha.

Henceforth, the Goddess is installed and the rituals of worshipping begin in the evening. The idols are in two forms : one is with the cardboard or the patti and the other one is of the clay. The goddess is offered Khuda Bhaja, Ukhuda, Chuda, Kanti Kakudi , Lia , Mishri, and all types of fruits. The prime offering being Khuda for which the name falls “Khudurukuni”. Every Sunday this crowning of then goddess and fasting of the girls continue. On the fourth or the last Sunday, the ritual happens to be very pompous. The little ladies break their fast with pure veg yet flavourful delicacies. The girls read a book of narration the story Tapoi every hitch on the Sundays. This is tale is wherefore of such celebrated occasion.