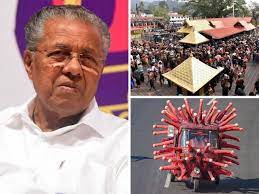 Thiruvananthapuram: The assembly elections in Kerala are being contested not only over scams, crises and controversies, but also over Ram and Ayyappa.

Although the dreaded coronavirus is still raging through the entire world even after a year, Kerala’s efforts to handle the contagion have been praised none other than the World Health Organization. The row over women’s entry into the Sabarimala temple has been a hotly contested topic.

The ruling Left Front government after the tug-of-war with devotees of Lord Ayyappa following the Supreme Court order on 28 September 2018 had granted permission to women of all ages to enter the hill shrine.

The BJP and the Congress-led UDF has used this as ammo to sway the electorate away from CM Pinarayi Vijayan for being “insensitive” towards religious sentiments of Hindus.

Gold smuggling, dollar smuggling, misappropriation of flood relief funds after the 2018 disaster, the deep-sea fishing controversy are also some of the issues that are likely to have impact on the election results.

Man launches murderous attack on neighbour over past enmity, detained