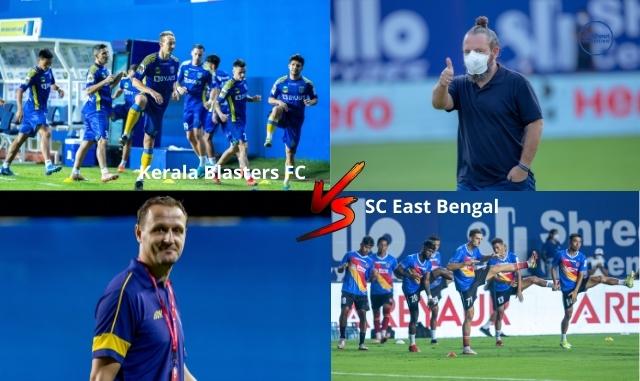 Goa: There will be no love lost on Valentine’s Day when Kerala Blasters FC and SC East Bengal clash swords, both teams having contrasting aspirations in the Hero Indian Super League at the Tilak Maidan Stadium on Monday.

Kerala will look to get back into the top-four after suffering a heavy defeat at the hands of Jamshedpur FC in their last outing. For SC East Bengal, it will be about salvaging some pride after being mathematically ruled out of the playoffs race with their loss to Odisha FC in their previous engagement.

While SC East Bengal will look to play party-poopers, for Kerala this game should be one to pick up three points as they take on ATK Mohun Bagan and Hyderabad FC, two teams above them in the league table, in the next two games after Monday. Their final three games see them go up against Chennaiyin FC, Mumbai City and FC Goa.

For head coach Ivan Vukomanović, his team’s set-piece woes would be a cause for concern given SC East Bengal do score a lot from them. The Blasters have conceded just four goals via open play, against ATK Mohun Bagan. In fact, no team has conceded fewer open play goals this season than Kerala Blasters

(6). SC East Bengal have scored 70.59% of their goals (12 out of 17) from set-pieces. No team scores a greater percentage of goals from set pieces than the red and gold brigade.

Kerala Blasters are also going through injuries and suspension filled period as they may be without Ruivah Hormipam, Harmanjot Khabra and Marko Leskovic for the next game, all of whom are either injured or suspended or not fully fit.

“We have enough players in our squad. That’s why we have a large squad. Some other players will take the positions. I am not worried. I am confident that these boys can do the job. We will see tomorrow. I am glad these boys will get some game time,” said Vukomanović.

“We are confident for tomorrow’s game. Every game is important now. We have to fully concentrated and ready to fight for all duels,” he added.

SC East Bengal, sitting 10th in the points table with just 10 points to show for from 16 games, will have nothing to lose. They have just managed to win one game so far and head coach Mario Rivera will be eager to change that statistic.

“I’m sure the top teams will not be happy to play SC East Bengal now because they know we’ll be a very difficult team to beat. We are focused on winning the next match,” he said.

“KBFC has a very balanced side. Their attack and defence are well balanced. Of course, they’ll miss some players in tomorrow’s game but their squad depth is fantastic and they’re performing well in ISL,” he added on Kerala.

The last time the two sides met, the game ended in a 1-1 draw.