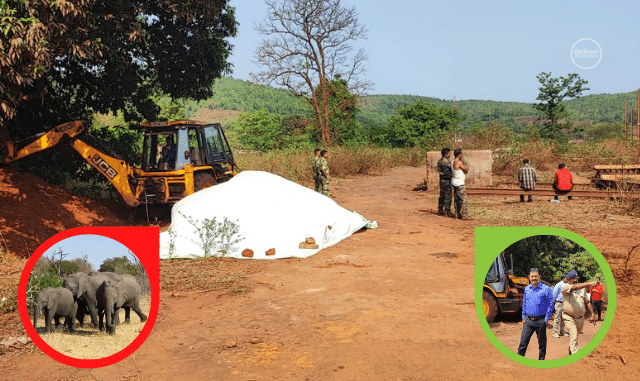 Joda: Rather than seeking a solution to avert elephant deaths in train mishaps, the Railways and Forest Department have indulged in a pointless blame game accusing each other of incoordination that resulted in the tragic death of a female elephant and two baby jumbos.

On Thursday evening, a tragic mishap took place near Bansapani Behera hutting within the Champua Range of Joda Forest Division in Keonjhar district. At around 7 pm, a herd of 22 elephants was crossing the South Eastern Railway’s Jurudi-Bansapani railway line when an iron ore-laden train hit them resulting in the death of a baby elephant and leaving another baby jumbo and a female elephant battling for life.

Though on intimation, Forest officials and a Railway rescue team reached the spot the rescue operation could not be initiated as the elephant herd had become aggressive after the mishap and were seen standing guard near the injured ones lying on the railway tracks. Following this, the movement of other trains was temporarily halted on the said route.

Sources say, the elephant herd remained at the mishap site for long hours and left into the forest past midnight after which the rescue teams moved in. However, the injured bay elephant succumbed to death at around 1 pm and the female jumbo breathed her last at around 5 am, sources added.

On intimation, PCCF Shashi Paul, Rourkela RCCF Arun Kumar Mishra, Keonjhar DFO Dhanraj Hanumant and senior railway officials arrived at the mishap spot to investigate. In the meanwhile, locals of the area have demanded a high-level investigation into the incident.

However, now the authorities concerned from the Forest dept and the Railways have now indulged in mudslinging accusing one another of being responsible for the accident.

On being asked, PCCF Shashi Paul said: “The Forest department had informed Railways that it is an elephant corridor. We guess railway dept did not take necessary steps even after they were intimated at around 4 pm about the movement of elephants.” A report has been sought from them and stringent action will be taken against those responsible for the incident, the PCCF added.

On the other hand, the Forest department has refuted the allegations. RK Gupta, ADRM (Infra), Chakradharpur Division, South Eastern Railway, said, “All the procedures were followed and the speed of the freight train was also slow at the time of the accident.” The investigation into the mishap is still underway, he added.