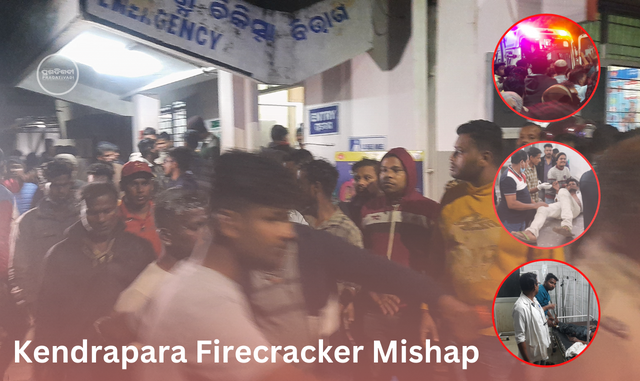 The puja committee had organised a fireworks competition despite disapproval from the local police station inspector-in-charge.

Kendrapada/Chandol: A competition of fireworks during the Kartikeshwar idol immersion procession left more than 50 persons injured and of the injured, more than 25 victims with critical burn injuries have been referred to SCB Medical College and Hospital in Cuttack for better treatment.

According to reports, the firecracker explosion took place during the Kartikeswar idol immersion procession at Balia under Bhagatpur Panchayat of Kendrapada district where a large number of people had assembled to witness the glittery fireworks.

After Sankranti, Kartikeshwar idol immersion takes place in Balia area with a large-scale celebration. The fireworks show was underway at around 9 pm when burning arrow firecrackers landed on a stock of firecrackers leading to a chain explosion. All of a sudden the fire rained down on the people dancing and merrymaking at Balia bazaar.

More than 50 people present at the post suffered burns and some of them close to the explosion point were the most affected. While all of them are admitted to the Kendrapara DHH, a crowd-like situation erupted outside the hospital. The relatives of the injured and the public thronged the district headquarters hospital to take stock. As the DHH could hardly accommodate a large number of victims, the seriously injured ones are being shifted to SCBMCH.

When asked, locals claimed that more than 20 arrow firecrackers were lit at once following which the explosion took place as there was fire everywhere.