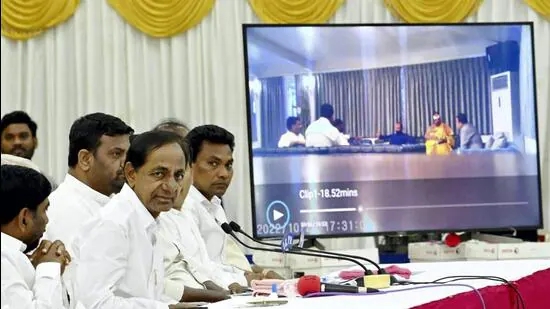 Hyderabad: Telangana Chief Minister K Chandrashekhar Rao, or KCR as he is popularly known, tore into the BJP as he screened videos to back his MLAs’ claims of poaching by the saffron party.

“With deep sorrow, I have called this press conference today. Democracy is being murdered today. This BJP is destroying the whole country, indulging in cheap politics and spreading fake news… A morphed picture of me with a Congress candidate went viral. It is shocking as to how they are using the press,” KCR said.

Each member had three different identity cards, including Aadhar card, PAN Card and driving licences. Though the person was the same, he had three identity cards with different names and even the father’s name being different.

Describing what happened while screening videos of negotiations of the covert operation, the Chief Minister said the accused contacted Tandur MLA Rohit Reddy several times over phone and in person. After understanding their plans, the MLA alerted the Chief Minister after which a complaint was lodged with the Home Minister Mohd. Mahmood Ali.

In the videos, the accused openly disclose how MLAs in Karnataka were influenced, how they were disguised as daily labourers and taken to the Yelahanka airport in a tractor and flown to Mumbai, where they were given money. The accused openly talk about the involvement of BJP’s bigwigs, right from union Home Minister Amit Shah, BJP national president JP Nadda and National General Secretary BL Santosh, with Ramchandra Bharathi also claiming that Prime Minister Narendra Modi did not interfere but was always informed about the developments.

The accused also assure the TRS MLAs that they would be ‘safe’ and that there would be no ED or IT raids. Apart from promising the Centre’s Y category security, they also say they will deliver the money at the desired locations of the MLAs, the Chief Minister said while giving a live narration as the videos were screened at the press meet.

The accused openly claim that eight governments were toppled and four more, including Telangana, Delhi, Andhra Pradesh and Rajasthan were in line with the operations being executed simultaneously. In another disclosure, the accused also explain about the contracts offered to those joining the BJP.

“In Delhi, each MLA was to be offered Rs.25 crore apart from contracts and the cumulative worth of the scam was Rs.1,100 crore. The source of this money should be probed by the ED,” said the Chief Minister.

The chief minister said the videos, which run into nearly three hours, apart from the call data records and other documents seized by the Cyberabad police during their sting operation on the farmhouse had been submitted to the high court while seeking the judicial remand of the accused.

“We are sending the entire material evidence to Chief Justice of India UU Lalit, all Supreme Court judges and chief justices of all high courts to make them understanding the conspiracy hatched by the BJP leadership to topple the democratically-elected state governments,” he said, appealing the judiciary to step in to save democracy in the country.

Telangana BJP official spokesman N V Subhash said there was nothing new in KCR’s revelations and alleged the sting was stage-managed. “The BJP doesn’t indulge in any such dramas, if it wants to attract any MLAs from any party. It will straightaway ask them to resign from their posts and join the party. There is no need to spend money to poach anybody,” he said.

He said KCR’s whole objective was to create fear among other opposition parties in the country that the BJP would topple their governments.

Rao said he would also send the evidence to central investigation agencies like the CBI, Enforcement Directorate and Central Vigilance Commission, besides directors general of police of all states to independently probe the conspiracy.

Rao said the conspiracy was at least a month old when Ramachandra Bharathi had come into contact with one of the four MLAs, Rohit Reddy, and started negotiations with him to lure the TRS MLAs.

“Reddy informed me and we immediately lodged a complaint with the police seeking investigation. That is how we managed to expose the entire conspiracy,” he said.