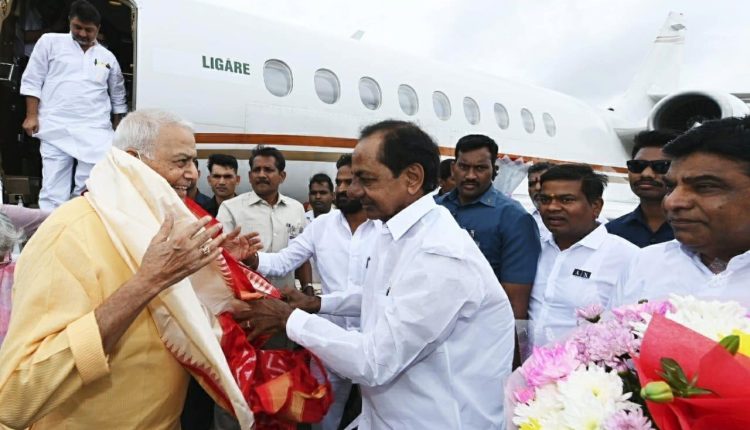 Hyderabad: Telangana’s capital Hyderabad is holding two massive shows of strength today. While the BJP is holding its two-national executive meeting, to be attended by Prime Minister Narendra Modi, the ruling Telangana Rashtra Samithi (TRS) has organised a rally in support of Yashwant Sinha, the Opposition’s candidate for the presidential polls.

Yashwant Sinha was received by TRS president and Telangana Chief Minister K Chandrashekar Rao at the Begumpet airport, just a couple of hours before the Prime Minister lands at the same airport.

K Chandrashekar Rao and Mr Sinha will then lead a bike rally from the airport to Jal Vihar, where a meeting has been organised in support of Mr Sinha’s candidature.

Yashwant Sinha is also scheduled to meet AIMIM and Congress leaders separately to seek their support for the presidential elections that will be held on July 18. Mr Sinha maintains that he will be “more constitutional” if elected as President than the National Democratic Alliance (NDA) candidate Draupadi Murmu.

On the roads of the city, a poster war has broken out. While the BJP has put up cutouts and banners showcasing the achievements of the centre, the TRS has put up posters featuring KCR and Yashwant Sinha.

This is the third time in six months that Mr Rao would not receive Prime Minister Narendra Modi at the airport. Earlier, he had flown to Bengaluru in May when PM Modi visited the state to attend the 20th annual celebrations at the Indian School of Business. Mr Rao avoided meeting the Prime Minister in February as well when he was in Hyderabad to inaugurate the “Statue of Equality”