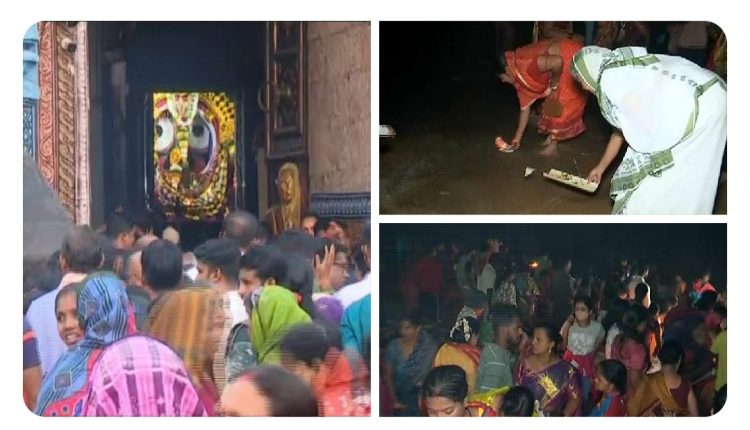 Puri: Lord Jagannath and his siblings Lord Balabhadra and Devi Subhadra were dressed in Rajrajeswar Besha or Suna Besha at the Lord Jagannath Temple in Puri on the occasion of Kartika Purnima.

Besides, Chaturdhamurti gave darshan to devotees in Suna Besha. On the other hand, a huge rush was witnessed at Mahodadhi throughout night as devotees set afloat miniature boats on the occasion of Kartika Purnima.

After the early morning rituals, the deities were adorned with huge gold ornaments and seated on the Ratna Singhasan (golden throne) inside the temple.

The Suna Besha of Lord Jagannath, Lord Balabhadra and Goddess Subhadra has been observed every Kartik Purnima within the temple premises. It is of a particular significance for devotes as they can witness the splendour of the Lords while they are seated on the Ratna Singhasana, the bejewelled throne, within the sanctum sanctorum.

In four other occasions, the deities also appear in the golden attire in Bahuda yatra, Dusssehra, Pausa Purnima and Dolapurnima.

As per legends, King Kapilendra Deb had brought huge amount of gold jewellery by conquering a neighbouring kingdom. He donated all the valuable metals to the temple in 1460. Since then, the Suna Besha has been a major ritual of the deities.