Kartik Aaryan Drops Pic As He Enjoys Sunset In Haryana

Haryana: Kartik Aaryan is one of the most promising actors in B-Town. He made his debut with the 2011 film Pyaar Ka Punchnama and since then he is ruling the industry. He often treats his fans and followers with his posts.

now the Luka Chuppi actor shared a beautiful picture on social media. Taking to the stories section of Instagram, the actor posted a serene photo in which he can be seen standing in lush greenery and enjoying the sunset in Haryana. The actor was facing the sun in the picture. He looked super hot as usual. 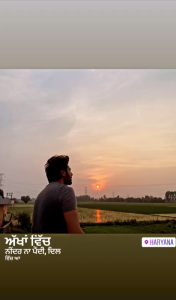 On the work front, Kartik is currently shooting for his upcoming film Shehzada. Helmed by Rohit Dhawan, the film is a remake of the 2020 Telugu film Ala Vaikunthapurramuloo which also stars Kriti Sanon in the lead.