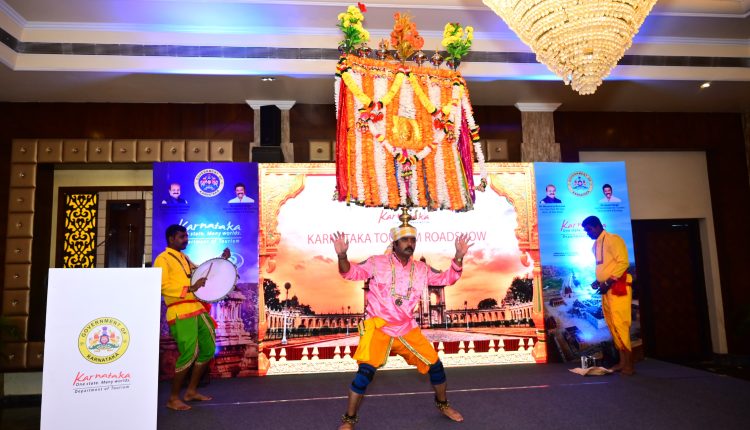 Bhubaneswar: With an aim to increase domestic footfalls from Odisha the Department of Tourism, Government of Karnataka along with Karnataka State Tourism Development Corporation Ltd. (KSTDC) organized a Roadshow at The Swosti Premium here to promote tourist places, hotels, resorts, homestays and service providers from Karnataka amongst the people of Bhubaneswar.

A performance of ‘Puja Kunita’, an ancient art form of Karnataka was organised to showcase the vibrant cultural heritage that Karnataka is known for. The roadshow brought together different aspects of Karnataka tourism such as nature, wildlife, adventure, pilgrimage, heritage, and many more. 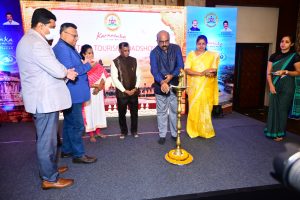 Mr. T. Venkatesh, IAS, Director, Department of Tourism said, “Karnataka is home to a large and exciting portfolio of globally acclaimed tourist attractions like UNESCO World Heritage sites, splendid wildlife and resplendent nature, virgin beaches etc. It is an around-the-year tourist destination. The roadshow series will provide impetus to domestic inbound travel and would enhance the marketing efforts of Karnataka Tourism to promote the state’s destinations to prospective tourists and the travel trade of Kolkata and other parts of Odisha.”

Karnataka Tourism’s main objective behind the event was to promote the state as a tourist attraction for leisure tourism, MICE – meetings, incentives, conferences, and exhibitions, adventure and wildlife tourism and as a wedding destination. KSTDC is the nodal agency to conduct the roadshows in various cities of India. The state also offers an avid traveler a vast range of tourism landscapes such as archaeology, religion, ecotourism and handicrafts.

Mr. G. Jagadeesha, IAS, Managing Director, Karnataka State Tourism Development Corporation said, “Karnataka with its diverse range of tourism products is fast emerging as one of the most interesting and productive states for both leisure and business travel. Domestic tourism being the backbone of the tourism economy has a lot of potential which needs to be tapped. Post-pandemic, these roadshow activities will be an excellent occasion for our stakeholders to renew contacts with the travel-trade as well as tourists’.”

The roadshow had B2B interactions and presentations that showcased the destination and also opened up new avenues to showcase Karnataka in a new light to the travel and trade community. Some of the stakeholders, who exhibited at the roadshow included KSTDC, Jungle Lodges and Resorts, Intersight Tours & Travels (P) Ltd, TGI Hotels & Resorts and WelcomHeritage Shiva Vilas Palace – Hampi. This exclusive B2B Roadshow had over 10 stakeholders from Karnataka and many discerning trade partners from Bhubaneswar.