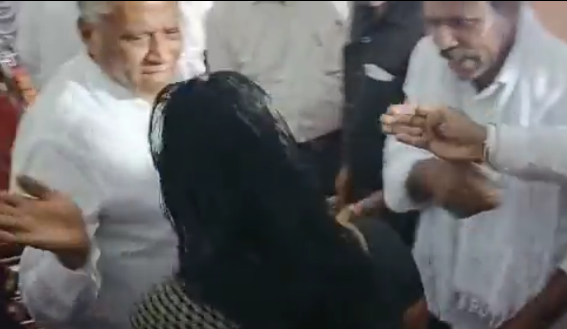 Bengaluru: Karnataka Housing Minister and senior BJP leader V Somanna was seen slapping a woman who came to him to tell grievance. The incident was caught on camera and was widely criticized after it went viral social media.

According to reports, the minister had visited Hangala village in Gundlupet Taluk of Chamarajanagar district to attend an event where the minister was distributing land title to land less people.

#WATCH | Karnataka Minister V Somanna caught on camera slapping a woman at an event in Chamarajanagar district’s Hangala village in Gundlupet Taluk, where he was distributing land titles.

The woman was seen pleaded for a plot for residential purpose.

Later, the woman was seen touching the minister’s feet. She said “the minister never beat me. He lifted me and consoled me. He also assured me to help.”

The Minister had attended the land document distribution event. Land titles were given to landless people who were occupying government land for residential purposes but had not secured any ownership of it till now.