Bengaluru: Kannada actor and activist Chatan Kumar, also known as Chetan Kumar Ahimsa, has been arrested amid the ongoing hijab row in Karnataka allegedly for his objectionable tweet against a high court judge who is hearing the hijab case.

“Kannada film actor and activist Chetan Ahimsa has been arrested by Bengaluru City Police. An on-its-own FIR was registered on Tuesday and under 505(2) and 504 of the IPC. Based on the tweet, the FIR was registered in Sheshadripuram Police Station,” MN Anucheth, the Deputy Commissioner of Police of Central Division said.

The tweet in question is a retweet of his own old tweet about Justice Krishna Dixit regarding a rape case. The old tweet of the actor posted on June 27, 2020 said, “This week KA (Karnataka) High Court Justice Krishna Dixit granted (granted) pre-arrest bail to rape-accused Rakesh B claiming ‘it is unbecoming of indian woman to sleep after rape; that is not way women react when they are ravished.’ What’s ‘unbecoming’ is 21st c (century) misogyny of this judiciary Dixit fossil.” 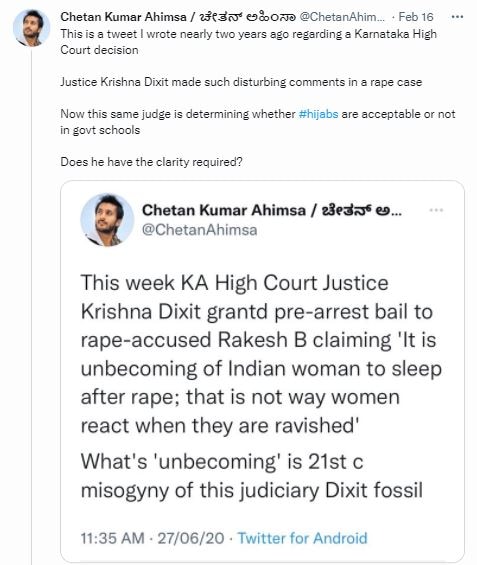 On February 16, he replugged his old tweet and wrote, “This is a tweet I wrote nearly two years ago regarding a Karnataka High Court decision. Justice Krishna Dixit made such disturbing comments in a rape case. Now this same judge is determining whether #hijabs are acceptable or not in govt schools. Does he have the clarity required?”

Polling under way for the fourth phase of Uttar Pradesh elections