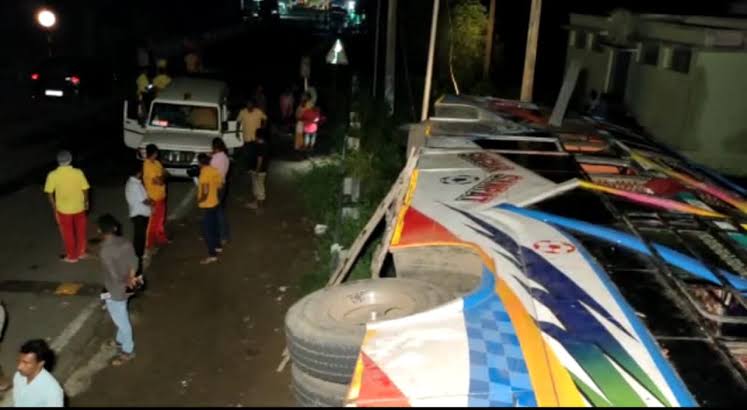 Ganjam: At least six tourists from West Bengal, four of them women, were killed and 40 were injured late on Tuesday night when the bus they were travelling in rolled down the road at Kalinga Ghat in the borders of Kandhamal and Ganjam districts of Odisha, police said.

The Prime Minister’s Office (PMO) tweeted late in the afternoon: “I am deeply pained by the loss of lives due to a tragic accident in Odisha’s Ganjam district. In this tragic hour, my thoughts are with the bereaved families. I pray that those injured recover at the very earliest.”

West Bengal Chief Minister Mamata Banerjee on Wednesday condoled the deaths of six tourists from the state in a road accident while travelling in a hired bus in Ganjam district of Odisha.

She said that the state administration is coordinating with Odisha counterpart for quick post mortem of the bodies and treatment of those injured on the mishap.

Banerjee also said that a high-level team led by the principal secretary in the state disaster management and the MLA of Udaynarayanpur is heading to Odisha to facilitate the return of those injured.

Reportedly, The incident took place past midnight near Durgaprasad village in Ganjam and 15 people among the injured are in serious condition, the police said on Wednesday.

The bus carrying 77 people, about 65 of them tourists from West Bengal’s Howrah and Hooghly districts, was moving towards Visakhapatnam in Andhra Pradesh from Daringibandi in Kandhamal district when the mishap took place, Ganjam superintendent of police Brijesh Rai said.

Police suspect that the bus rolled down the road while negotiating a curve in the hilly terrain after the driver lost control over the vehicle.

The bodies of the six tourists who died in the mishap were retrieved after breaking the window panes of the bus, Bhanjanagar sub divisional police officer S S Mishra said.

The dead are Supiya Denre (33), Sanjeet Patra (33), Rima Denre (22), her mother Mausumi Denre and Barnali Manna(34) from Sultanpur in Howrah district and Swapan Gushait (44), the cook from Gopalpur in Hooghly, police said.

Odisha Chief Minister Naveen Patnaik has expressed grief over the accident and wished speedy recovery of the injured.