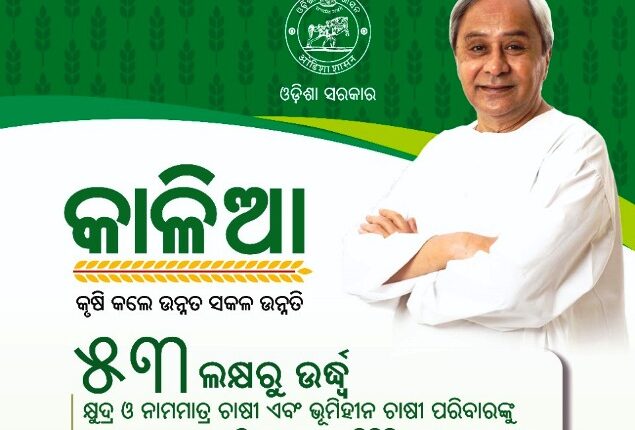 Bhubaneswar: Odisha government has transferred Rs 1272 crore to the accounts of 53 lakh small and marginal farmers and landless labourers under the flagship KALIA scheme.

Chief Minister Naveen Patnaik disbursed the amount to the farmers of Odisha during a video conferencing session here today. Accordingly, each farmer received Rs 2,000 which would be credited to their bank accounts directly.

Introduced in the year 2019, the KALIA scheme has become an ideal one as World Bank has lauded it by saying that the loan burden of the farmers have been reduced following the introduction of the scheme.

Patnaik said his sole intention is to provide benefit to the agrarian sector. The farmers of Odisha must live in dignity and get the maximum benefit out of agriculture, he added.

The Chief Minister said all the sectors were affected due to coronavirus pandemic. But, the farmers of Odisha has earned laurels by improving the production of different species. He praised the farmers for their efforts during the pandemic.

He said Odisha government has been putting forth the demand before the Centre to double MSP for farmers.

Patnaik interacted with farmers of the different districts through video conferencing. The farmers like Kumari Marai, Sundergarh, Manik Pradhan, Bargarh, Ghana Paik, Nabarangpur, Dasarathi Sahu, Nayagarh interacted with the Chief Minister. They shared their success stories with him how after getting KALIA assistance they have flourished in their work.

Agriculture Minister Arun Sahu said due to the able leadership of Chief Minister the farmers of Odisha have increased their production.