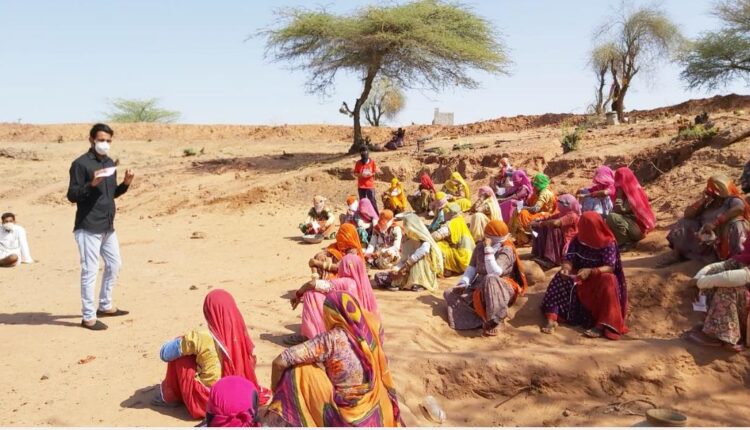 Jaipur: Coronavirus infection is spreading all over the country day by day. Now the rural areas of our country are also being infected gradually. However, the awareness campaigns are being run by the central government and the state government to save the people from Corona Virus. But the awareness, run by the government in newspapers and media is not approaching such people who have neither TV nor newspaper.

This is how such Idea came into Satyendra’s mind

After the commencement of unlock, Satyendra visited the rural areas. He saw that most of the people wore masks on their faces. They were following the rules of social distancing but the women workers of MNREGA were not following the Corona guideline. They sat in the shade of trees in flocks without masks.

The efforts by Satyendra

After seeing this an idea came into his mind that Corona virus might spread among the MNREGA workers. He decided that he must do something to save the lives of these innocent women. So he printed 5000  pamphlets and distributed them among the villagers.

He also urged the administration to set up tents for MNREGA workers so that they easily take lunch in the shade with social distancing.  He mailed to the SDM Osian and the BDO Tinwari and demanded that tents must be arranged for the women workers.

Rajpurohit is a student of journalism. He is pursuing M.A in journalism from JNVU. The local government also appreciated the selfless efforts of Satyendra Singh Rajpurohit.

The MNREGA workers also praised the efforts of Rajpurohit. They also promised to follow  Corona guideline and precautions told by Rajpurohit.