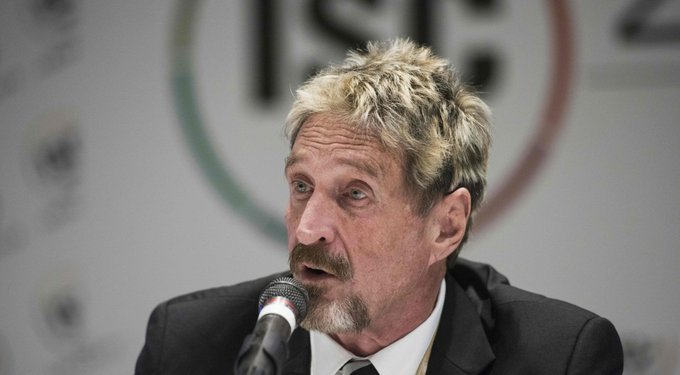 Barcelona: John McAfee, the antivirus software pioneer, was found dead in his jail cell near Barcelona on Wednesday.

His death came just hours after a Spanish court announced that it had approved his extradition to the United States to face tax charges punishable by decades in prison, authorities said.

Soon after his death, McAfee’s tweet from December 2019 went viral on social media. Sharing a picture of his tattoo on his right arm, McAfee had said, “If I suicide myself, I didn’t. I was whackd. Check my right arm.”

McAfee, who was among other things a cryptocurrency promoter, tax opponent, U.S. presidential candidate and fugitive, who publicly embraced drugs, guns and sex, had a history of legal woes spanning from Tennessee to Central America to the Caribbean. In 2012, he was sought for questioning in connection with the murder of his neighbor in Belize, but was never charged with a crime.

McAfee’s body was discovered at the Brians 2 penitentiary in northeastern Spain. Security personnel tried to revive him, but the jail’s medical team finally certified his death, a statement from the regional Catalan government said.

McAfee was arrested last October at Barcelona’s international airport and had been in jail since then awaiting the outcome of extradition proceedings. The arrest followed charges the same month in Tennessee for evading taxes after failing to report income from promoting cryptocurrencies while he did consulting work, made speaking engagements and sold the rights to his life story for a documentary. The criminal charges carried a prison sentence of up to 30 years.