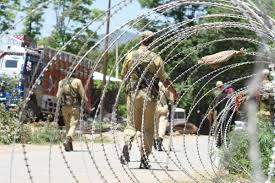 Srinagar: A reformed terrorist who contested J&K DDC polls in Rajouri has appealed others to give up arms and join the mainstream.

He is Munaf Malik, the ex-divisional commander of a terrorist organization. He has contested from  Jammu and Kashmir’s Darhal Malkan constituency in Rajouri.

Malik told the media that he is feeling proud of doing so and appealed to terrorists to give up arms and join the mainstream. These are all means of political propaganda (jihad), he added.

He said our democratic system is unique and the second largest after the United States of America.

The polls are conducted in a fine manner, he said and added that all must participate and become part of the government and vote for their favourite candidates.