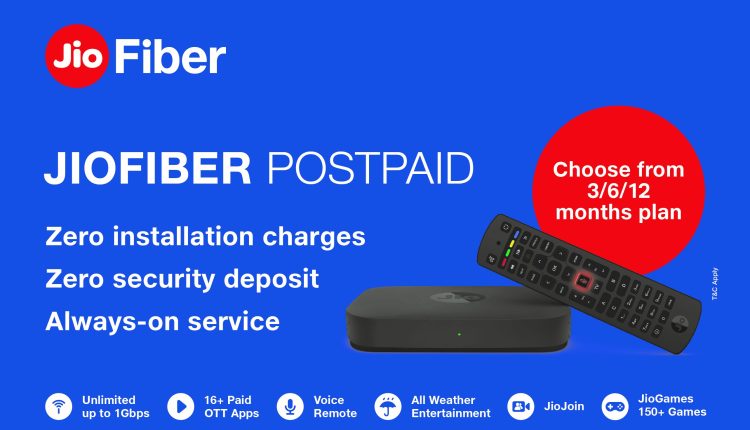 JioFiber expands its footprints to over 35 cities & towns across Odisha

Bhubaneswar: Further consolidating its position as the most popular high-speed broadband service in the country, JioFiber has now become available in over 35 major cities and towns across Odisha. 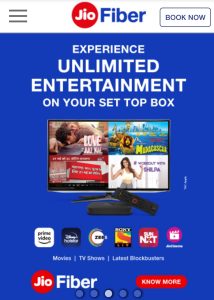 JioFiber has also extensively expanded its service in the existing cities and towns where JioFiber has already been available, covering new areas and city outskirts, catering to thousands of customers, including individual households to small and large enterprises and professionals in various fields providing an enriched experience with access to unlimited Entertainment, News, Health and education platforms.  As per the latest telecom subscriber data released by TRAI, JioFiber has 1,41,346 high-speed broadband subscribers in Odisha, as of May 31, 2022.

It is worth mentioning here that JioFiber now offers zero entry cost for new post-paid plan users, wherein users get Internet Box (Gateway Router), Set Top Box and Installation valued at Rs 10,000 at zero cost when they opt for a JioFiber Post-paid connection. Another game-changing proposition is JioFiber Entertainment Bonanza offering unlimited entertainment starting at only Rs 100 extra. While users will continue to access unlimited high-speed internet starting at Rs 399/month, additionally, by paying just Rs 100 or 200 extra per month, they can now access contents of their choice through a collection of up to 14 popular OTT apps.

In Nabarangpur town, JioFiber services are now available at Patalsahi, Chauraguda, Badamsahi, Senapatisahi, Bhagabati Sahi, Raju Sahi, Shanti Nagar, Telisahi, Goudsahi, Dussehrapoda and are in the process of fast expanding its services to other parts of the town. Similarly, in Jaleswar town of Balasore district, JioFiber is now available at Badabazar chowk, Basanti Padia, LIC office, Block office chowk, Sasanbad, Patharpura and nearby areas and is expected to roll out fast in other areas of the town soon. In Phulbani town, JioFiber has commenced service at Amala pada, Bus stand area, Master pada, Contractor pada, Main Road Phulbani area, medical area, Municipality area and nearby areas while fast expanding to other areas of the town.

In Ghasipura town of Keonjhar district, JioFiber service has become available in major areas including Salapada, Janara, Khaparakhai, Ghasipura Bus Stand and Medical Road and fast expanding to other areas of the town. Similarly, JioFiber high-speed broadband is now available in key areas of Barbil town of Keonjhar district including areas Rungta colony, Rajib Nagar and nearby places and is in the process of fast expanding into other areas of the town. Fast expanding JioFiber high-speed broadband service has now become available in most areas of Chhatrapur town in Ganjam district and recently expanded to Goutham Nagar, Park Street, Ramlaxmi Nagar, Patnayak colony, LIC colony, Kulti Gopalpur and nearby areas.