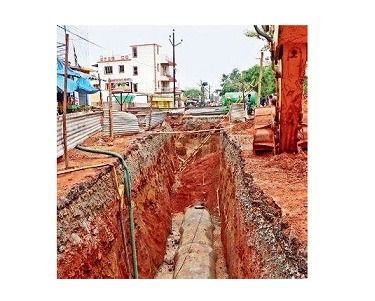 Cuttack: The Japan International Cooperation Agency (JICA), which had undertaken the drainage and sewerage projects of Cuttack, continues to give woes to residents as cracks occurred in the walls of the houses here.

Reportedly, the project work has damaged the underground drinking water pipes as well as the roads which leads to inconveniences for the pedestrians.

As per reports, one of the locals from Kalyani Nagar alleged that cracks occurred in his house. Following this, the JICA had promised to provide funds to repair his house. Yudhisthir Behera lodged a complaint with the JICA in charge Basant Kumar Senapati regarding the cracks in his house walls. Following this, Basant assured Yudhisthir that he will get the compensation money for repairing. However, he did not get any money so far.

Similarly, houses next to Yudhisthir’s house are also facing the same issue due to the project work.

According to available information, commuters at Kalyani Nagar are also facing trouble in transportation due to the digging up of roads and drains under the project work. As the duration of the work extending the troubles is increasing.