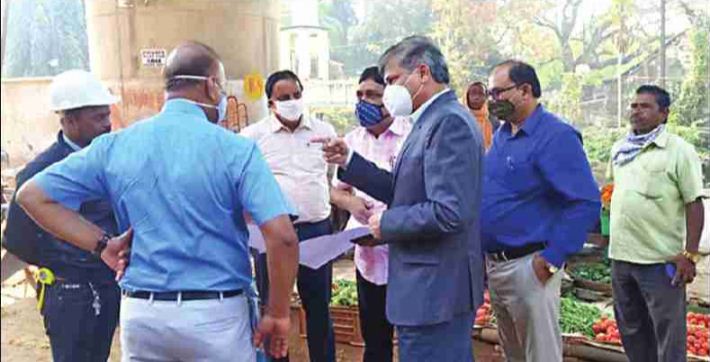 Khurda: The construction of the flyover bridge in Jatni, which was termed to be one of the biggest problems of the locality, is being continued unabated. However, the demolition process and rehabilitation of local shopkeepers remain an obstacle to the construction work.

Meanwhile, it is being suspected that the construction work would be delayed further without the co-operation of the Contractors with the district administration regarding the demolition process and rehabilitation.

Reportedly, Khudra district collector Sanat Kumar Mohanty along with Anuj Kumar Das Pattnaik, Jatni Tehsildar Tapan Mahapatra, Khurda ROB Dilip Mahanty, Additional Tehsildar Dilip Sarangi along with PWD JE reached the spot to take the stock of the situation and allotted a space near a newly-built bus stand to the 143 shopkeepers, who will be shifted soon.

Meanwhile, 23 shopkeepers of the Badabazar area will be transferred to a different place.
However, as the Record Of Rights (ROR) of the land, on which the houses were built, is in the name of Lord Jagannath, shopkeepers will get the reimbursement for the place only after submitting the calculation of the house’s construction price.

Hence, the district collector while his visit to the Sitaram Chak area, held discussions with the engineer and other officials regarding the Demolition and rehabilitation process.

While the process of Demolition at the Sitaram Chak area will be initiated with one week, co-operation is being expected from the shopkeepers as it will lead to smooth rehabilitation, sources said.