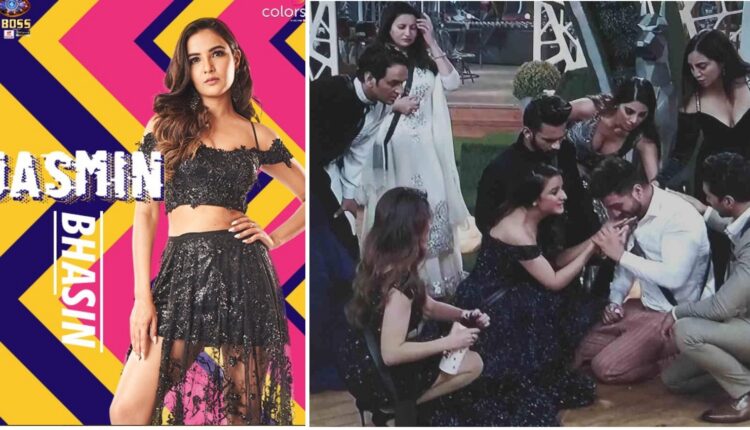 Mumbai: Jasmin Bhasin got evicted from Bigg Boss 14 house on Sunday night’s episode following which, her rumoured boyfriend Aly Goni broke down, while Salman Khan too could not hold back his tears.

Jasmin Bhasin penned a note to thank her fans for their support and has now asked them to come out in support of her best friend Aly Goni who is still in the house.

Showing gratitude to her fans, she began the note with, “To all you beautiful people, who have stood by me through thick & thin, during this rollercoaster ride of Bigg Boss I just wanna tell you, I absolutely love each & every one of you. I was in tears after I saw all the love & support my fans have showered me with, on my good days and even on my bad ones. Your love made my journey so much easier. I am truly grateful to have you all in my life. I couldn’t have done this without your support.”

Asking her fans to enable Aly win the show, she further wrote, “With over 2 million tweets for #BringjasminBhasinBack you guys have proved your strength. I am shocked & but so grateful at the same time. Mai bahar aa gayi hun, par Aly abhi bhi andar hai. He might think he is alone but let’s show it to all, that he is not. Let’s all come together to give @alygoni the love & support to win this thing!! We have to make Aly lift the trophy for #jasLy – Love jasmin Bhasin.”

Jasmin Bhasin, Aly Goni, Abhinav Shukla and Rubina Dilaik were nominated by Bigg Boss after they were caught discussing nominations. All of them revolted against the punishment, claiming that they were talking about their strategies rather than nomination. However, Bigg Boss did not budge.

Recently, during the family week, Jasmin’s parents had asked her to play solo. Her mother had said that Aly overshadows her performance. When she told her mother that they have been friends since before the start of the show, her mother replied with a big “no”.

Breaking
10 Suspected Terrorists Killed In Encounter In Balochistan Stage Set For ‘Make In Odisha Conclave’ From Today FIFA WC 2022: Senegal advances to knockout round with 2-1 win over Ecuador FIFA World Cup 2022: Netherlands beats Qatar 2-0 to finish atop Group A Odisha W&CD Dept inks MoU with American Indian Foundation to implement Integrated Programme for Chil... Maternal Mortality Ratio Dips To 97 In 2018-20 From 130 In 2014-16 SEBI Introduces Credit Risk Based Investment Limit For Actively Managed Mfs In Debt Instrument BCCI Serves Conflict Of Interest Notice To Its President CM Naveen To Descend On Padampur Battlefield On Dec 2 Teachers To Intensify Stir As Talks With Govt Remain Inconclusive
Sign in
Sign in