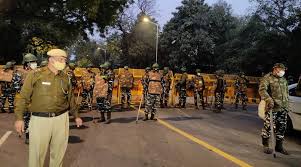 New Delhi: Jaish-Ul-Hind has claimed the responsibility for the blast near Israel Embassy in Delhi recently.

Reports said the cyber cell of the Delhi Police Crime Branch is investigating the matter. Patrolling in Himachal Pradesh’s Mcleodganj and Dharamkot, with substantial Israeli population, has been increased.

SSP Kangra Vimukt Ranjan Mcleodganj said the police station has been put on alert to cope with any eventualities.

Dharamkot is three kilometres from McLeodganj and is known as ‘Mini Israel’. It also houses a four-storeyed Chabad House (Jewish community centre).

After two years of compulsory service with the Israeli army, thousands of Israelis flock to Himachal to take the much-needed break in the Himalayas.

The Israeli spy agency Mossad has become involved in investigating and is assisting the probe initiated by Delhi police.

A letter addressed to the Israeli Ambassador to India Ron Malka has reportedly linked the blast to Iran. Media reports  said the letter described the act as a “trailer” and also referred to Qassem Soleimani and Mohsen Fakhrizadeh as “Iranian martyrs”.

Soleimani, leader of the foreign wing of Iran’s Islamic Revolutionary Guard Corps, was killed in a US drone strike in January 2020.

Delhi continues to be in the grip of air pollution