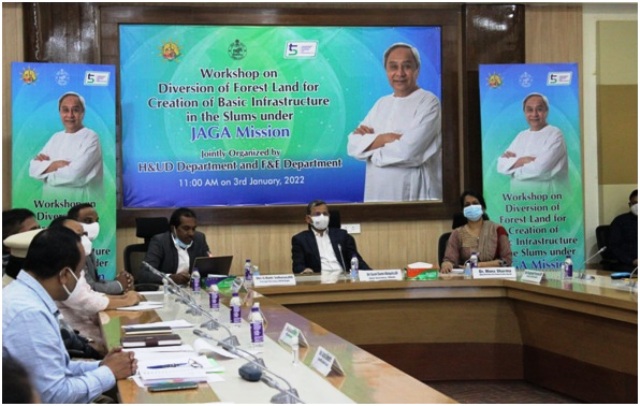 Odisha has been conferring of World Habitat Award-2019 and Asia-Pacific Housing Award -2021. This was known from the workshop on the creation of basic infrastructure for slum habitats in urban forest areas held today in the convention centre of State Lok Seba Bhawan.

Inaugurating the workshop, Chief Secretary Suresh Chandra Mahapatra said, “Provision of descent and liveable habitats for urban dwellers is the dream of Chief Minister Sri Naveen Patnaik; and, he has launched the path braking campaign JAGA Mission for the purpose”. Mahapatra added, “ The first phase of the Mission emphasis focused on grant of land rights to the slum dwellers of the NACs and Municipalities. In the “present second phase, the focus is on up-gradation of the slums and mainstreaming those with the urban living”.

Mentioning that the urban dwellers were an inseparable part of the urban life, Mahapatra directed to ensure assured, descent and liveable habitats for the old slum dwellers in all the urban bodies including the old slums in urban forest areas. Such provisions would be the right solution to the challenging problems like encroachment, evacuation, congestion, and poor living conditions in slums.

Addressing the workshop, Additional Chief Secretary Forest, Environment and Climate Change Dr Mona Sharma said that a well thought out standard operating procedure (SOP) for up-gradation of urban slums was worked out following the doctrines laid by the Chief Secretary. The SOP would resolve the problems relating to land rights and infrastructure development for the slum habitats in urban forest areas.

Outlining objectives of the workshop, Principal Secretary housing and urban development G. Mathivathanan said that Jaga Mission of Odisha received international acclaim; and the State was conferred the World Habitat Award-2019, and Asia-Pacific Housing Award -2021. He added that Government launched the special campaign for transforming the urban habitats to Biju Adarsha  Colonies.

Further, Mathivathanan said that around 3000 slum habitats containing 168,141 slum households were identified through a special survey named Urban Slum Household Areas (USHA) undertaken with geo-spatial technology in NACs and Municipalities. Out of this, 70,000 HHs were granted in-situ land rights and 1,03,328 HHs were granted land entitlement certificates, In the meanwhile,  550 slums were upgraded and mainstreamed with urban life. Chief Secretary asked the department to complete up-gradation of all the identified slums by end of the current year.

Director Municipal Administration Sangramjeet Nayak appraised that as per USHA survey, 253 slums spread across 45 ULBs in 22 districts were found to be in urban forest land. Because of the forest area, problems cropped up with regard to the settlement of land rights and laying of infrastructure for basic amenities. The SOP worked out through a joint venture of the forest and urban development department was piloted in the Dhenkanal municipality. The result was a total success.

Discussions in the workshop showed that with the success of the pilot project, the Government decided to implement the SOP in all 253 slums in urban forest areas. Today’s workshop was organised to sensitize the Collectors and field officers about the SOP and its implementation.

Chief Secretary directed the concerned departments to complete the task in a time-bound manner. It was also decided that both the administrative departments would nominate senior officers as the nodal officers for smooth implementation of the SOP.  The Principal Chief Conservator of Forests Sishir Kumar Ratho directed the DFOs to prioritize implementation of the SOP.