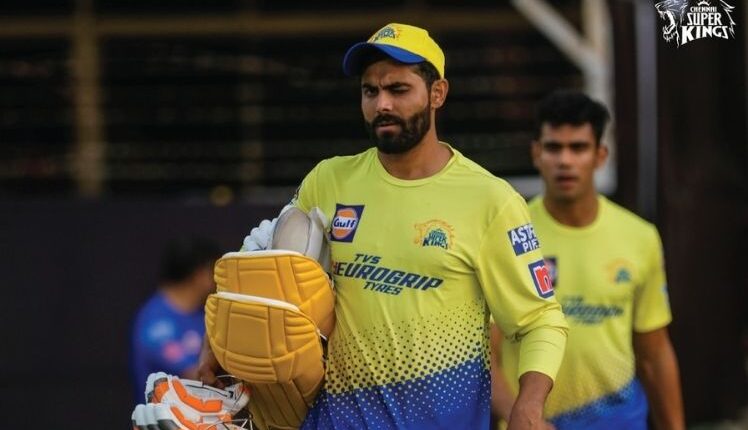 Jadeja Set For 150th Match For Chennai Super Kings; Players With Most Matches For CSK

When Ravindra Jadeja steps on to the field on 9th April 2022 against the Sunrisers Hyderabad, he would be featuring in his 150th match for the Chennai Super Kings. Only two men have accomplished this feat for the Super Kings till today. And, they are MS Dhoni (217 matches) and Suresh Raina (200 matches).

This beautiful Jadeja – Chennai Super Kings relationship started in 2012. And through the course of a decade, Jadeja has grown from a talented player to a senior statesman. From rockstar in 2012 to captain in 2022.

Jadeja is like an ‘all in one’ cricketer. The 33-year-old can mould his game to suit the demands of the situation that his team finds itself in. He can score quick runs with the willow if his team wants them, he can come in and scalp a few wickets with the ball and break flourishing partnerships. He is a star in T20 cricket, while being the No. 1 ranked all-rounder in Test cricket. That says it all.

Jadeja is the third highest wicket taker for the Super Kings, having scalped 110 wickets in 149 matches. With the willow, the left-handed batter has amassed 1523 runs for the Yellow Brigade.

Jadeja has played many glittering knocks that fans will remember for a long time. In just his second match for the Super Kings in 2012, Jadeja announced his arrival with a rollicking 48 off 29 against Deccan Chargers that helped the team win by 74 runs. There has been no looking back.

Fast forward nine years to 2021, and we will delve deep into another Jadeja special that will not fade away from the minds of the fans. Jadeja blasted a 28-ball 62* against the Royal Challengers Bangalore side and helped the Men in Yellow beat their opposition by 69 runs. In this match, Jadeja took Harshal Patel for 36 runs in a single over (a record in IPL cricket).

Jadeja’s journey with the Super Kings took another significant step ahead of the IPL 2022 season when MS Dhoni handed over captaincy to him. While there’s plenty more in this Yellovely relationship, here are a few words from the man himself – spoken to CSK TV ahead of the IPL 2022 auction – that sum it all up:

“CSK is everything. It’s a family. CSK is like my home now. I’ve been a part of the team for 10 years. I don’t see myself playing for some other team from now.”

When Chennai Super Kings take on Sunrisers Hyderabad on April 9, Ravindra Jadeja will achieve something that only two other Super Kings have managed to achieve in the past.

4. Dwayne Bravo (123 matches)At No.4 we have Dwayne Bravo. The all-rounder has represented the Chennai Super Kings in 123 matches in his career. Bravo is the highest wicket taker in IPL history – a milestone he achieved in IPL 2022. For Chennai, has prized out a staggering 143 batters in the yellow flannels, and has taken his wickets at an average of under 23. With the bat, the 38-year-old has scored 1258 runs at an average of 27.34. Bravo has been an integral part of the Super Kings since 2011.

3. Ravindra Jadeja (149 matches)The Chennai Super Kings skipper is occupying the third place in the list. Jadeja has featured in 149 matches for the Super Kings in his career, and has been extremely valuable with both bat and ball. The left arm spinner has taken 110 wickets for the Men in Yellow, and averages 28.44 with the ball. Jadeja has scored over 1500 (1523) runs with the bat for the four-time IPL champions.

1. MS Dhoni (217 matches)The first place in the list is occupied by none other than MS Dhoni. The 40-year-old has been associated with the Chennai Super Kings franchise since the inception of the IPL in 2008, and has played 217 matches for the team. Dhoni has led the Men in Yellow to four IPL titles and two Champions League T20 titles during his tenure as the skipper. The right-hander is the second highest run getter for the Super Kings, and has amassed 4710 runs in his illustrious career.