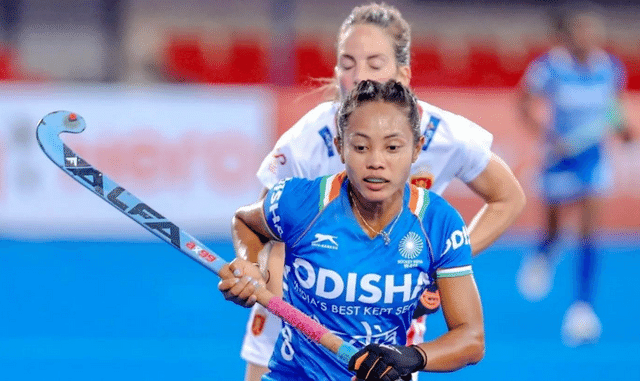 The team is upbeat ahead of the first match on Sunday, says Chanu who will make her maiden World Cup appearance

Amstelveen (Netherlands): Sushila Chanu has played 208 matches for India, and represented the country in back-to-back Olympics Games and has a Bronze medal from the Asian Games in 2014, but the Manipur-born midfielder will make her maiden World Cup appearance on 3rd July.

Hence, her excitement knows no bounds ahead of India’s first match at the FIH Women’s World Cup on 3rd July in Amstelveen, Netherlands where they will take on nemesis England in their pool B match. “In 2018, I missed playing the World Cup in London due to an injury. Subsequently, I struggled with form which resulted in me missing out on the Asian Games that year. It was perhaps one of the biggest lows of my career. It was a difficult phase but I was determined to overcome it and earn my place in the squad again,” recalled an emotional Sushila.

After missing out on the Asian Games Palembang-Jakarta where India won a Silver medal in 2018 and the World Cup the same year where India made the Quarterfinals, Sushila returned with a bang and has become a strong force in the team’s growth over the past four years. She was part of India’s victory at the FIH Series Finals as well as the FIH Olympic Qualifiers in Bhubaneswar, India. She also played a key role at the Tokyo Olympics, and then featured in India’s line-up at the Women’s Asia Cup in 2021.

Sushila achieved her 200th international cap while representing India at the FIH Women’s Hockey Pro League 2021/22 where India finished third. “I am very happy and excited to have this opportunity to represent India at the World Cup. For many of my teammates, it’s their second outing at the World Cup but for me, it’s a first. It is an emotional moment for me and I surely believe it will be a memorable one for us,” she exclaimed on the sidelines of the team’s practice match against Chile on Tuesday evening in Amstelveen.

Speaking about the mood in the dressing room ahead of the big-ticket event, Sushila said, “We arrived in Amstelveen soon after our Pro League matches ended in Rotterdam last week. We have had enough time to settle into the team hotel and also have been training at the World Cup venue.”

“Definitely everyone is pumped up and looking forward to give their 100 per cent. Netherlands is a fantastic venue for hockey and the hosts have created a great atmosphere for the participating teams. We are all looking forward to our first match and a good start against England is what we need,” experienced Chanu signed off.

On 3rd July, India will take on England in their first pool B match at 8 PM. The matches will be live on Star Sports First and streamed on Disney+ Hotstar