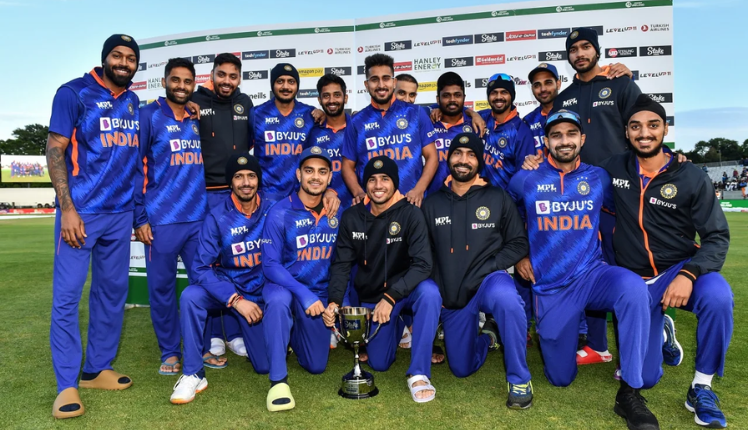 It’s A Matter Of Pride For Me That I’m Playing For India: Deepak Hooda

India defeated Ireland in a last-ball thriller by 4 runs that saw Deepak Hooda and Sanju Samson enter the record books with a 176-run stand in the first innings to help India to 225/7.

Speaking after the game, Hooda, who made a scintillating 57-ball 104, felt elated about his terrific effort with the bat.

”I’ve never opened in an international game, but being a top-order batsman, you have to cope up to the challenges and you don’t have any option.

”And if you don’t have any option, then why don’t you go there like a warrior. That’s how I think, and things turned in my way. I’m happy about that,” said Hooda after the match.

The 27-year-old added that it’s not an easy task for a player to retain his place in the Indian team.

‘To be honest, yes it is difficult to find a spot in the Indian team and then staying there. But at the same time when you’re playing in India colours, that time you never think about yourself, you think about the team.

”That’s what I think about on the ground ‘How can I contribute to the team in that situation’. I don’t think more than that, try to keep things simple. Yes, it’s a matter of pride for me that I’m playing for India, no matter if I’m scoring or not,” said Hooda.

Hooda, who walked in at number 3 in the third over and went on to smash 9 fours and 6 sixes, praised the Irish team for their brilliant effort during the chase.

”To be honest, the Irish team played really well against us and we enjoyed playing against them. Between the first and second game, I think there was a difference in the pitch. In the first game, the conditions were overcast and the wicket was damp. But today the wicket was very good for batting, as is clear by the way both teams batted. So I felt the wicket was a big factor.”

The right-hand batter also revealed that a mindset change recently has helped him perform better.

”Being a cricketer, what I’ve learnt lately is that you should not think too far ahead. How many ever series, look at it one game at a time. If my work ethic is good, I’m going to be in a good space of mind and I’m going to score, that’s my thinking. Try to keep it simple, live in the present, play the situation well, and then automatically the outcome will come. Now or later, it will come,” Hooda said.

The all-rounder further praised skipper Hardik Pandya and childhood friend Sanju Samson, who combined with the right-hand batter for a 176-run stand for their efforts.

”Obviously, Haridk is leading very well. He led a new franchise in the IPL and they won the title. I’m really happy for him and the way he’s taking responsibility. I’m really proud of him, he’s doing very well.”

”To be honest, I was coming from a good IPL and wanted to follow the same performance. Happy with my intent. I like playing in that manner (aggressive) and these days I am batting up the order so getting some time.”

”Sanju is my childhood friend, always good to bat with him. Thank you to fans, the way they came and supported us,” Hooda concluded.