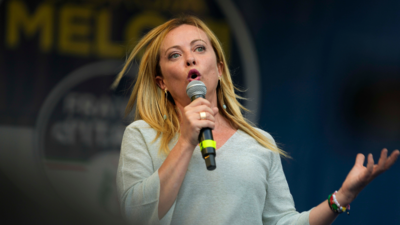 Italy: Giorgia Meloni won a clear majority in Sunday’s Italian election, setting herself up to become the country’s first female prime minister at the head of the most right-wing government since World War II.

Her alliance, which also includes Matteo Salvini’s League and Silvio Berlusconi’s Forza Italia, claimed about 43% of the vote, according to projections for RAI, the public broadcaster. That would give the bloc at least 114 seats in the Senate, where 104 votes are required for a majority.

Meloni emerged from the political fringes after leading the opposition to Mario Draghi’s technocratic administration which stabilized the country over the past 18 months following the trauma of the pandemic. Yet the charismatic 45-year-old has little experience of governing and she would be taking office at a perilous moment for her country.

Giorgia Meloni, head of the nationalist Brothers of Italy party, said on Monday Italian voters had given a clear mandate to the right to form the next government and called for unity to help confront the country’s many problems.

“If we are called upon to govern this nation, we will do so for all Italians, with the aim of uniting the people, of exalting what unites them rather than what divides them,” Meloni told reporters. “We will not betray your trust.”