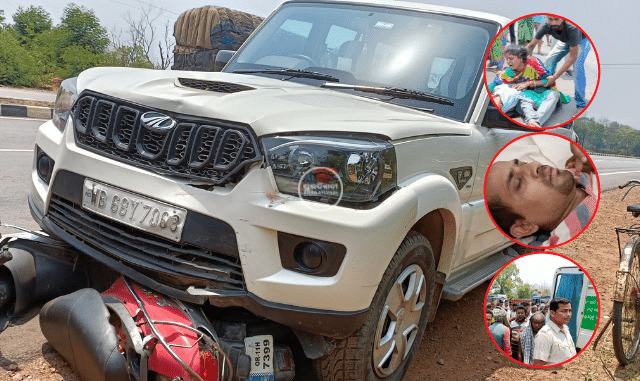 Bangiriposi: An irate mob allegedly beat a person to death after an elderly man was run over by a speeding SUV at Katara Chhack under Bangiriposi PS of Mayurbhanj district.

According to reports, the incident took place near Katara Chhak on National Highway 49 at around 11 am today. Harihar Sethi (67), of Goshanipal village in Banakati panchayat, was driving his scooter when he was hit by a speeding SUV (Mahindra Scorpio WB-68-Y-7063).

The eyewitness said that the SUV driver dragged the scooter a long distance after hitting following which the elderly man died on the spot. Though locals apprehended the driver for a short while, the latter managed to give a slip taking advantage of the growing crowd.

However, two passengers onboard the SUV had to face the wrath of the angry mob that thrashed the duo mercilessly following which one person, identified as Satyanarayana Nanda (45), of Keonjhar’s Anandpur, succumbed to death while undergoing treatment at the Baripada Hospital (DHH).

Another passenger of the SUV, Phool Chandra Sharma (45), of Uttar Pradesh, who sustained critical injuries in the mob attack, is currently undergoing treatment at Pandit Raghunath Murmu Medical College & Hospital at Baripada. Both the deceased and the injured are said to be government officers working in the Vasudha scheme.

On the other hand, locals staged a road blockade for five hours, demanding justice and compensation for the victim’s family.

Reportedly, police have launched a probe after registering a case (74/22) and booked the villagers under Section 302 of the IPC as the assaulted man succumbed to death at the hospital.

IIC Sanjay Kumar Parida said that all those involved in the attack and the driver who fled the scene after the accident will be arrested soon.