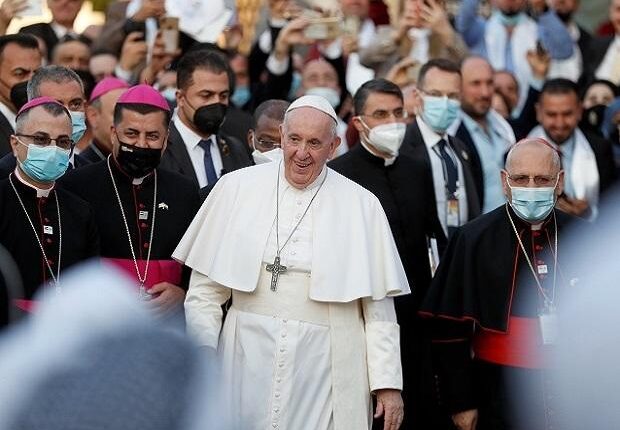 Baghdad: Pope Francis will visit parts of northern Iraq that were held by Islamic State (IS) militants on the third day of his historic trip to the country.

Militants overran the region in 2014, destroying historic churches and looting. Christians have been returning there since IS was defeated in 2017.

The Pope will also celebrate Mass at a football stadium in the city of Irbil, with up to 10,000 attendees expected.

Pope Francis, on Saturday, met with Grand Ayatollah Ali al-Sistani, one of the most senior leaders in Shia Islam, in Iraq’s holy city of Najaf to deliver a message of peaceful coexistence, urging Muslims to embrace Iraq’s long-beleaguered Christian minority.

The historic meeting in al-Sistani’s humble home was months in the making, with every detail painstakingly discussed and negotiated between the ayatollah’s office and the Vatican.

Pope Francis, who is on a four-day historic trip to Iraq, on Saturday (local time) denounced extremism in the name of religion as “betrayals of religion” and called for friendship and cooperation between religions.