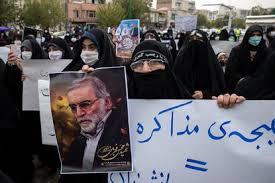 “Unfortunately, the operation was very complicated and was done using electronic equipment and no [perpetrators] were at the scene,” Ali Shamkhani, secretary of Iran’s Supreme National Security Council, told reporters during the burial ceremony of Mohsen Fakhrizadeh.

Israel wanted to kill Fakhrizadeh for 20 years, the official said, adding “this time, the enemy used a completely professional, sophisticated and new method” that was finally successful.

Israel, long suspected of killing Iranian nuclear scientists over the last decade, has declined to comment on the attack.

Fakhrizadeh headed Iran’s so-called AMAD program, which Israel and the West have alleged was a military operation looking at the feasibility of building a nuclear weapon. The International Atomic Energy Agency says that “structured program” ended in 2003. U.S. intelligence agencies concurred with that assessment in a 2007 report.