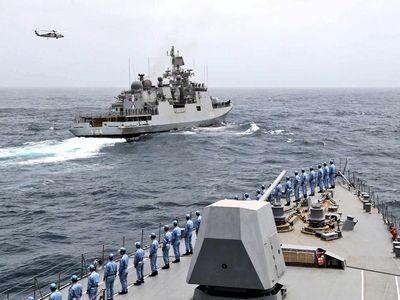 New Delhi: Indian Navy has denied  that it has joined Iran-Russia naval exercise in Indian Ocean. It has dismissed earlier report on the matter.

Media reports said that forces and vessels from both the Iranian Army as well as the Islamic Revolutionary Guard Corps’ (IRGC) navy divisions were taking part in the exercise. Many vessels from the Russian Navy were also participating, it added.

The Admiral Gholamreza Tahani, spokesman of the drill, said that the Indian Navy was also participating with a select group of vessels. Hossein Khanzadi, commander of the Iranian Navy, even stated that the Chinese Navy was also expected to join the exercise.

The naval drill is being held in an area spanning 17,000 square kilometres. The exercise involves shooting at sea and air targets and liberating hijacked ships.