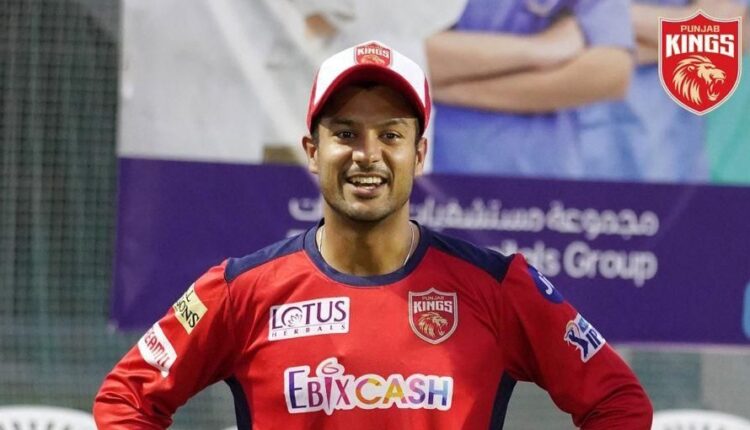 Chandigarh: Swashbuckling Indian opener Mayank Agarwal has now officially been handed over captaincy responsibilities ahead of the Tata Indian Premier League 2022 for the Punjab Kings. The 31-year-old will lead the franchise in the coming season, taking over from friend and state teammate KL Rahul.

Agarwal had a great season with the team in IPL 2021 too, amassing 441 runs in 12 matches at an impressive average of 40.09. He also possessed a healthy strike rate of 140.28 through the season, creating some memorable moments for the team, and the fans.

“I have been at Punjab Kings since 2018 and I take a lot of pride in representing this fantastic unit. I am delighted to be given the opportunity to lead the team. I take over this responsibility with utmost sincerity, but at the same time, I believe my job would be made easier with the talent we have at the Punjab Kings squad this season.

“I thank the team management for entrusting me with this new role of leading the side. I look forward to the new season and the new challenges it brings with it,” said Mayank after being named captain.

Head Coach Anil Kumble too opined on the captaincy choice, stating “Mayank has been an integral part of the side since 2018 and of the leadership group for the last two years. The new squad we selected at the recently concluded auction has exciting young talent and outstanding experienced players. We want to create a strong foundation for the future with Mayank at the helm.”

A brief stint with captaincy

The right-handed batter had a one-match tryst with captaincy last IPL after KL Rahul had to undergo a surgery. Punjab Kings faced Delhi Capitals in this game at Ahmedabad.

The Agarwal-led unit may not have won the game, but it definitely brought out the best in the stand-in captain, who decided to lead from the front.

Put to bat first, Agarwal opened the innings with Prabhsimran Singh by his side, who fell with just 17 runs on the scorecard. While all of the captain’s partners perished, his knock helped the team put up a respectable total on board.

Agarwal scored a fiery 99* off just 58 deliveries, smashing eight fours and four sixes during this knock. Striking at 170.68, he ensured PBKS stacked up a target of 167, despite being at just 88/4 in 14 overs.

If anything, this knock was testimony to Agarwal’s abilities to lead his side by example, and it is safe to say that we have a lot of that coming this year.

Punjab Kings have often entrusted captaincy responsibilities to youngsters to help them nurture their inner leader while keeping the team’s best interests in mind. With this decision, Agarwal is about to join the ranks of these players.

Yuvraj Singh explored captaincy for the first time with Punjab Kings, then Kings XI Punjab, in the first two seasons of the Indian Premier League. Singh’s captaincy record is the best the team has so far, winning 58% of the matches played.

Indian veteran spinner R Ashwin shouldered the captaincy responsibilities for the team in 2018-19. It was his first stint leading the side too. Under his leadership, the franchise gave debuts to several local stars like Arshdeep Singh and Harpreet Brar, unearthing a new generation of talent for Punjab.

KL Rahul took up captaincy for the first time in IPL 2020 and continued the following year too, leading the team in 27 matches. Rahul’s captaincy saw Punjab Kings give opportunities to youngsters like Ravi Bishnoi and Deepak Hooda, both of whom have now made their India debut as well in limited overs cricket. Today, we also see Rahul don the role of the Indian cricket team’s vice captain, and that is some statement to make.

Agarwal is now a part of this unique club, sharing space with Yuvraj Singh, R Ashwin and Karnataka teammate KL Rahul. With a superb performance as batsman over the past few seasons, it will be interesting to see how Agarwal performs now to the challenges of captaincy.