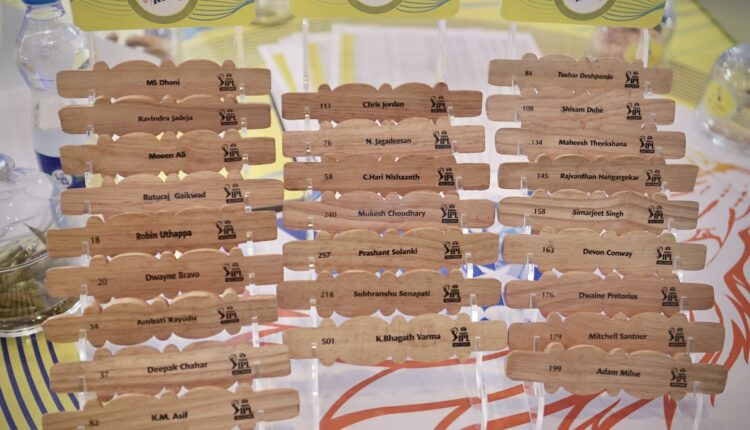 Chennai: Some familiar faces from the Super batch of 2021, and some fresh entries. The Super Kings completed their squad on Day 2 of the Player Auction for IPL 2022.

Here’s a quick look at the new Super Kings in the squad for 2022.

A fast bowler from Mumbai, Tushar has played five IPL matches so far. He has played 31 T20s picking up 44 wickets, and was a net bowler for the Super Kings last year.

The medium pace bowling all-rounder has played 13 T20Is for India apart from 24 matches in IPL. His reaction: “I’m really excited to be a part of this big franchise. And yes, always a dream to play under Mahi bhai. Whistle podu!”

The 21-year-old Sri Lankan ‘mystery’ spinner has played 11 T20Is picking up 9 wickets at an economy rate of 6.42. He has played four ODIs as well.

The right-arm pacer was a part of India’s Under-19 World Cup 2022 winning team, picking up 5 wickets from six games and scoring 52 runs from two innings with the bat.

Dwaine Pretorius is a South African bowling all-rounder, who has played 22 T20Is, picking up 23 wickets, apart from 31 wickets in 23 ODIs.

Adam Milne is a right-arm fast bowler from New Zealand, who has picked up 32 wickets from 31 T20Is. He has also picked up 7 wickets from 9 games in the IPL.

Subhranshu Senapati is a middle-order batter from Odisha who has scored 499 runs from 21 T20s.

Mukesh Choudhary is a left-arm medium pacer from Maharashtra, who has picked up 16 wickets in 12 T20s.

The right-arm pacer from England has picked up 80 wickets from 75 T20Is while also picking up 25 wickets in 24 games in the IPL with best figures of 4/11. Jordan has vast experience in the format, especially in death bowling, and is a useful batsman in the lower order as well.