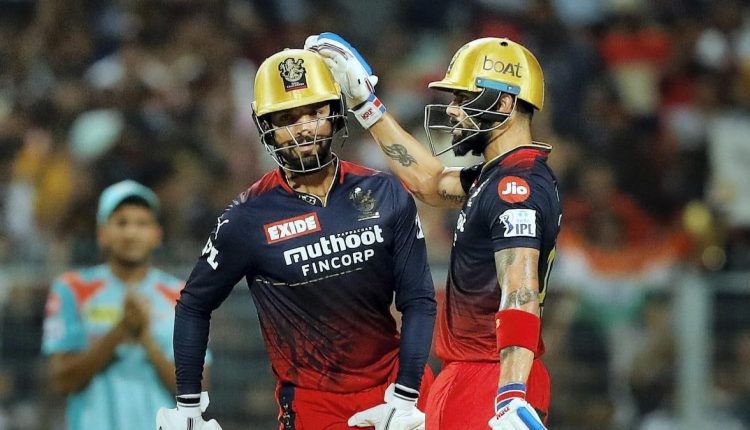 Kolkata: While the Eden Gardens crowd was waiting for a masterclass from Virat Kohli, it was Rajat Patidar who gave them plenty to cheer on Wednesday in the IPL 2022 Eliminator between Royal Challengers Bangalore and Lucknow Super Giants. Patidar, who came in as a replacement player for RCB in the ongoing season, smashed a 49-ball hundred and finished with 112 in just 54 balls as the former finalists posted a 207-run total.

He shared a 92-run stand with Dinesh Karthik, who himself scored 37 off 23 balls, and it came in just 41 balls. In the process, Patidar, who was brought in as a replacement for Karnataka batter Luvnith Sisodia halfway through the season, ended up rewriting a few records.

– Patidar is the first uncapped player to score a century in the playoffs/knockouts of the IPL. The previous highest score by an uncapped was the 94 off 50 balls that Manish Pandey scored for Kolkata Knight Riders in the final of the 2014 IPL.

– He scored his century in 49 balls, which is the joint fastest ton scored by any played in the playoffs or knockouts of the IPL. Patidar equalled the record set by Wriddhiman Saha, who scored 115 off 55 balls for Kings XI Punjab in the 2014 IPL final.

– Patidar’s 112 not out has helped him go past a player who was recently inducted in RCB’s hall of fame. He has surpassed the 89 off 47 balls that Chris Gayle scored against Mumbai Indians in 2011.

– This is the third-highest score by an uncapped player in the IPL. Patidar crossed the unbeaten 101 that Devdutt Padikkal scored for RCB against Rajasthan Royals last season. Manish Pandey is second while Paul Valthaty tops the list.

Meanwhile, Patidar and Karthik’s onslaught in the final overs helped RCB take as many as 88 runs in the death overs. That is the most scored by any team in this period of a match in the 2022 season.