New Delhi: On January 20, 2021, all the teams have released their retained squad list ahead of the IPL 2021 Auction. The window for the eight IPL franchises to retain players for the Indian Premier League 2021 season closed yesterday and 139 players were retained by the franchises whereas 57 players were released from their existing squads.

The following players from the eight franchises were retained & released from the squad: 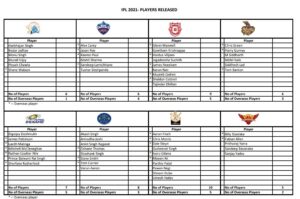 CSK KKRiplIPL 2021IPL 2021: Here's the complete list on who's been retained and who's been releasedKXIPlatest newsMIRCB

WHO plans to approve COVID-19 vaccines for poorer countries

Janneman Malan, Fatima Sana Named as ICC’s Emerging Players of The Year For…