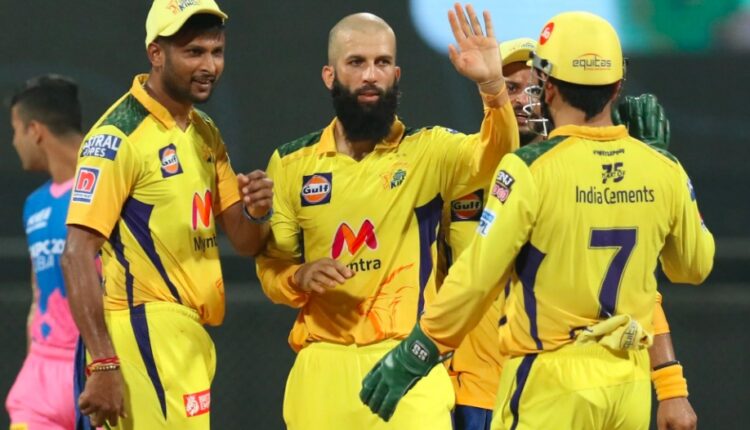 Chennai Super Kings (CSK) registered their second consecutive victory in the season after beating Rajasthan Royals (RR) by 45 runs in Match 12 of the VIVO Indian Premier League (IPL) 2021 at the Wankhede Stadium in Mumbai on Monday.

Moeen Ali starred with the ball while Ravindra Jadeja grabbed 4 catches, adding to his two crucial breakthroughs that powered CSK to a comprehensive win over RR.

Chasing a target of 189, RR openers Manan Vohra and Jos Buttler got off to a solid start, scoring 11 runs off Deepak Chahar in the first over before Sam Curran bowled a tight second over.

Vohra then took on a short one and deposited Curran for a maximum before the right-hander holed out to deep mid-wicket, providing CSK their first breakthrough in the fourth over.

Buttler on the other end, played fearless shots and attacked the pace of Chahar straight down the ground, with a four and a six off the wicketkeeper batsman’s blade.

However, Curran managed to get the RR skipper Sanju Samson out cheaply with a slower one as RR ended their powerplay with a total of 45/2 on board.

Shivam Dube joined Buttler at the crease and the duo steadily played the middle-overs, with Buttler playing the aggressor role. The right-hander put away Jadeja’s deliveries for two fours and later smacked a six off a free-hit.

RR were placed at 81/2 at the 10-over mark and that’s when the game turned around completely in CSK’s favour.

It all started with Jadeja castling Buttler’s stumps that landed in the perfect stop as the right-hander fell one short of a fifty. The CSK all-rounder then trapped Dube in front, in the same over.

David Miller, who was the hero of RR’s previous game, could only score 2 runs this time around after Moeen Ali got the left-hander out for LBW.

The right-arm spinner then picked two wickets in the 15th over, with both dismissals almost identical to each other. Riyan Parag and Chris Morris tried to launch Ali out of the park but ended up handing it straight to Jadeja at deep mid-wicket.

With the pressure of chasing a big total, RR collapsed in no time and lost vital wickets in the middle-overs, slipping to 95/7.

Rahul Tewatia (20) and Jaydev Unadkat (24) helped RR recover to a certain extent and smashed 3 sixes between them before becoming victims of the slower balls by Bravo and Shardul Thakur respectively as CSK sealed a win.

Earlier, CSK, who were put in to bat, and RR remained unchanged after securing victories in their respective games.

Openers Faf du Plessis and Ruturaj Gaikwad got off to a watchful start against the left-arm quicks Jaydev Unadkat and Chetan Sakariya, before du Plessis charged down and cleared the ropes in the second over against Sakariya.

Ruturaj looked rusty against the pace variations of Mustafizur Rahman and was dismissed after top-edging one to extra cover as the left-armer scalped his first wicket of the match, providing an early breakthrough for RR.

du Plessis wasn’t affected with the wicket though as he brought his paddle-scoop into display and smashed three fours and a six off Unadkat, scoring 19 off the fifth over.

Chris Morris was brought on to bowl the final over of the powerplay and the pacer brought an end to du Plessis’ dangerous knock after the latter sliced it to Riyan Parag in the outfield.

CSK were placed at 46-2 at the end of powerplay. Moeen Ali continued his rich form and clobbered 2 sixes early in his innings, playing with full freedom.

The left-hander tried to further damage RR’s bowling after adding 33 runs with Suresh Raina but ended up mistiming a wider delivery from Rahul Tewatia that brought an end to the left-hander’s innings.

Ambati Rayudu joined Raina at the crease and the duo went after the part-timer Riyan Parag, smashing two sixes each and brought up 16 off the eleventh over. The result was no different in the next over after the right-hander smacked Tewatia for consecutive sixes.

Sakariya came back to bowl the 14th over and shifted the momentum back to RR after scalping two wickets with both Rayudu and Raina looking to go big against the left-arm seamer.

RR managed to add some pressure after the double-wicket over and forced CSK to play a quiet couple of overs. CSK skipper MS Dhoni smacked two boundaries before Sakariya dismissed the wicketkeeper-batsman and scalped his third wicket of the innings.

Jadeja was dismissed in the very next over and Morris bagged his second wicket of the innings. Although RR picked wickets at the death, Dwayne Bravo played an entertaining cameo, scoring 20 off only 8 balls and helped CSK finish with a flourish with a total of 188/9.