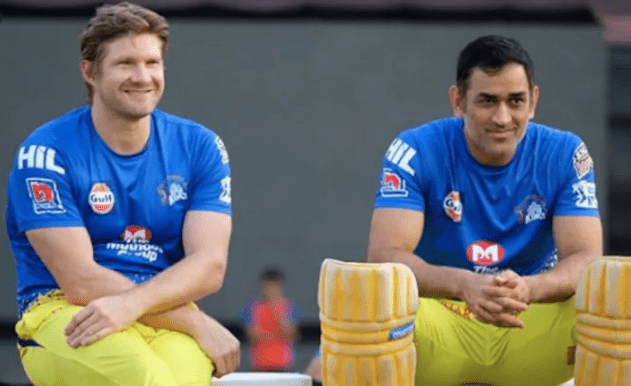 IPL 2020: Shane Watson Thanks MS Dhoni For Not Dropping Him Despite Bad Performances

New Delhi: 39-year-old Shane Watson has retired from all forms of cricket after his IPL team Chennai Super Kings’ ouster from 2020 edition going on in UAE.

CSK, sometimes referred to as ‘Dadd’y Army’ because of their key players being in the age bracket of 35-40, failed to qualify for the play-offs for the first time in their 11-year IPL history. There were doubts hovering around the future of some of their star players but some of them have cleared the air already.

Chennai captain MS Dhoni and Faf du Plessis have made it clear that they will be featuring in the IPL 2021, while Watson called it time on his illustrious 18-year career.

Discussing about his 3-year stint with CSK, Shane Watson said that one thing he found different with the franchsie was trust shown in him by team’s capatain MS Dhoni and coach Stephen Fleming. In a conversation with presenter Rupha Ramani, Watson said that despite failing time and again in 2019 season, he was not dropped from the playing XI. The Australian hailed the captain-coach duo for putting their trust in him.

“That you go 10 games without scoring runs and still get picked (laughs). Last season, thank you MS Dhoni and Stephen Fleming for keeping the faith. That was phenomenal and made me feel that good to go, a bit a block would not stop me,” he said.

Shane Watson revealed that he came to know about Dhoni’s impact on cricket and people of India after watching a documentary on him while travelling in a flight. Watson added that Dhoni’s ability to simplify complex situations is a stand out trait in him.

“Sitting on a plain and there is a TV screen in front of me showing documentary on MS. I remember watching his documentary and I did not know the extent of the impact he has on Indian cricket and especially Indian public in general. When he has his long hair and then he cut it off, around about that time. The thing that stands out to me, after getting to know him in the last 3 years is how easily he simplifies a complex situation,” Shane Watson said.

Shane Watson ended his IPL career with 3874 runs and 92 wickets. Staring his career with Rajasthan Royals, Watson won the inaugural edition of IPL in 2008. He had scored 472 runs and picked up 17 wickets in that season.

Watson spent 7 successful years with the Royals before moving to Royal Challengers Bangalore wherein he didn’t find a lot of success. It was then that CSK happened for him. Shane Watson smashed 117 runs of 57 to help CSK clinch their 3rd IPL title in 2018.

In a rather forgettable IPL 2019 outing, Watson hit a valiant 80 with a bloodied knee but his effort went in vain as CSK lost the final to Mumbai Indians by 1 run.