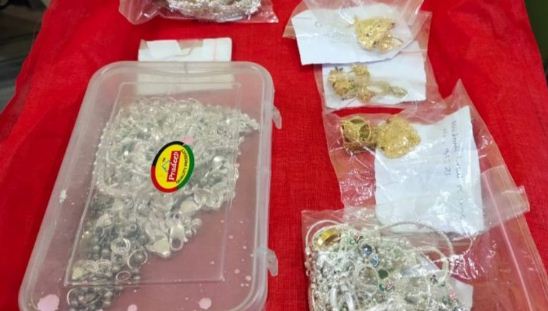 Bhadrak: Bhadrak police has busted an inter-state looter gang with the arrest of four persons and also seized a huge cache of valuables from them on Thursday.

The arrestees have been identified as Sangram Jena, Brundaban Behera, Sudarshan Rout, and Atul Behera.

According to police sources, a few days ago, some miscreants had looted valuables from a house. Following this, police earlier arrested four interstate looters.

During interrogation, it was learned that there are many pending cases against the accused in different police stations in several districts of the state.

“According to the statements of the accused, four others have been arrested today. They have been identified as Madan Mohan Mohapatra and Santosh Sahu from Bhadrak district and Anand Chandra Sahu and Prabhat Sahu of Jajpur district. They had bought jewellry from the inter-state looters,” an official said.

“We have also seized 322 grams of gold and 4kgs of silver ornaments. The accused has been forwarded to the court and further investigation is underway,” the official added.

In a press conference, police have announced that seized ornaments will be returned to the belongings through a fair.