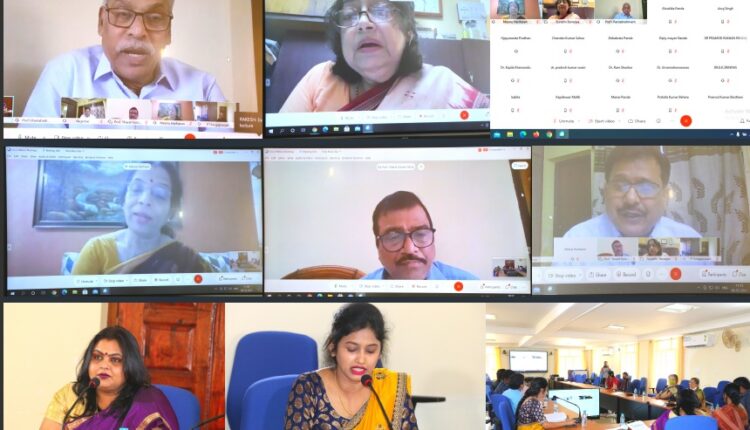 Ms. Archana Snehasini Turuk, PhD Research Scholar, Department of Biodiversity welcomed the guests. The programme started with Opening Remarks in the form of a presentation by Prof S K Palita, Dean, SBCNR, who outlined the importance of women in society.

Prof.Ms. Surabhi Banerjee, Former & Founding Vice Chancellor, CUO was the Resource Person. Prof Banerjee, an eminent academician & institution builder, stated that the state of the women in the country has many a mile to go but is poised reach its destination. She referred to a field study in a village in the northern part of India where a woman helplessly says, ‘I am no one….’ She also refered to woman leaders like Malala Yusufjai and developmental programmes like Beti Bachao Beti Padhao. She fondly recollected the initial days of the CUO and how she envisaged it as a world class university inspite of the numerous problems including remoteness, backwardness and insurgency. Her speech was beautifully decorated with relevant references from the Devi Sutra of Rig Veda, Tagore’s Chitrangada and Emanda Gormend’s poem The Hill We Climb.

Prof. Ms. Meena Hariharan, Founder of Association of Health Psychologists, University of Hyderabad and Member, Executive Council, CUO deliberated on the topic of role of women in the context to Atmanirbhar Bharat. Prof Hariharan explained Atma as inner consciousness and Nirbhar as reliance, which means relying on one’s own inner consciousness. She said that the concept of Atmanirbhar Bharat refers to the collective consciousness of the nation and women have played a great role in implementing this concept in all ages. Focusing on the pandemic period, she gave examples of women’s(Anganwadi workers)contribution in making PPE and decorative masks, tribal women of Uttar Pradesh manufacturing sanitizers from Mahua, women of Chattisgarh nurturing Neem tree and promoting Roti banks for migrant labourers. She explained that the Mother in Women manages finances and takes care of life. She also mentioned the efforts by CUO to start a helpline number for students’ emotional cognitive rehabilitation under her guidance where women faculty joined as counselors.

Prof I Ramabrahmam, Vice Chancellor, CUO in his presidential address underlined the significance of the International Woman’s Day and the commitment of the CUO to uphold the women’s rights & dignity at workplace. He informed that four of the Executive Council Members of the Central University of Odisha are women and provide valuable support to the CUO. He also acknowledged the contribution of Prof Surabhi Banerjee in laying a solid foundation to the growth of CUO.

Dr A K Das, Registrar, CUO shared lines of concluding remarks the Vice Chancellor, CUO for his dynamic leadership and the resource persons for their erudite deliberations. He thanked the ICC team under Dr Kakoli Banerjee for organizing the webinar and Prof P Durga Prasad for mentoring it.

Dr Kakoli Banerjee, Assistant Professor, DBCNR and Presiding Officer, ICC, moderated the programme and gave a formal vote of thanks. She thanked all the distinguished dignitaries and explained the scope and significance of the ICC and the IWD.