Bargarh: Bargarh Police on Wednesday claimed to have busted an inter-state gang of ATM looters, with the arrest of two persons from Uttar Pradesh, while two persons managed to flee from the spot.

Acting on a tip-off, a police team led by Bargarh SP Rahul Jain apprehended the accused while they tried to escape from the Chhatapathar area in the district.

“These looters were involved in various ATM looting cases in Bhadrak, Berhampur, Ganjam, Puri, Rayagada, Kalahandi, Bolangir, and Bargarh. Meanwhile, police are undertaking raids in different parts of the country to arrest the other members of the ATM looters’ gang,” SP Jain said in a press meet.

“We are trying to nab other accused who were involved in this case. We have started interrogating the apprehended persons and further investigations are underway,” Jain added. 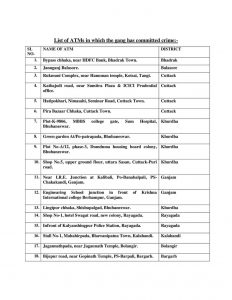 Businessman Shot Dead In Kandhamal, Accused On The Run