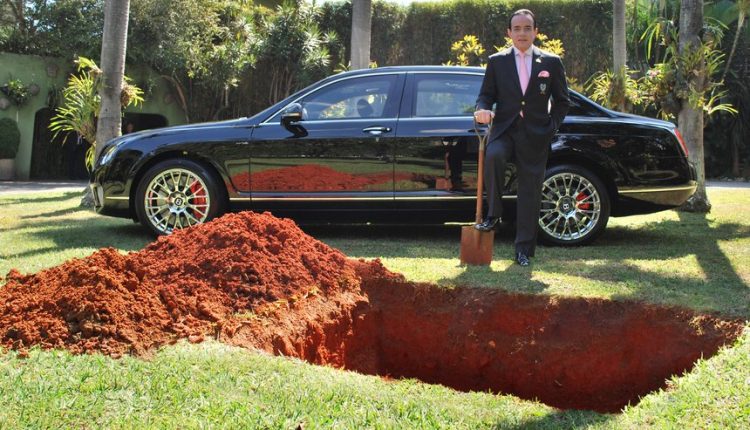 Inspired by Pharaohs, this mega-rich Brazilian wanted to bury his 310000 pounds Bentley with him. WHY?

I am a proud organ donor who has taken the pledge for organ donation. The pledge was taken to celebrate my 51st birthday, and my wife Milly joined me in this noble cause since both of us are convinced by the urgent need for organ donation whereby one person can save eight lives. The pledge was taken by us as we want to live beyond, love beyond, and not just receive the gift of a life well lived, but gift it further.

We humbly request all to take the pledge for organ donation or whole body donation.

Thane Chiquinho Scarpa, (referred to as Scarpa from now on) who was one of Brazil’s richest men, announced that inspired by the Pharoahs’ he wanted his 310000 pounds Bentley to be buried with him so that he can drive around in style in his after-life.

How is this related to the cause of organ donation? Read on.

Scarpa said that he wanted his Bentley to be buried with him. This caused lot of consternation and people were very angry even at this selfishness by the tycoon, exhorting him to sell his costly car and donate the proceeds to charity instead. Scarpa bluntly refused and was adamant to go ahead with his idea, which he called as path-breaking

He even said that he was used to a comfortable car and wanted to have an equally comfortable car for his after-life and after working so hard to make so much money he was entitled to it. He refused to listen to any logic to the contrary and rather said that he wanted lot of publicity and lot of people to see this function. He posted details on his Facebook page as well.

Scarpa even ordered a huge pit to be dug for the car. In an elaborate ceremony, the car was prepared to be lowered to the ground. An angry media prepared for live broadcasting for the entire country so that no one would do something so eccentric again.

Moments before it was done, Scarpa stopped its lowering and said it was all a stunt. He then asked everyone, you all wanted to donate my car, but is it more important than heart or eyes or kidney or liver? He said that he had timed his stunt to match National organ donation week, and had planned this stunt to raise awareness.

Scarpa’s campaign was a huge success and there was an increase in organ donation in Brazil by as much as 31.5%.

Do we need a Scarpa to drive home this blunt truth to us, that we wont be taking our organs with us to the after-life. Do we not take off the jewelry, chains, bangles and costly watches off the body of our loved ones so that it can be of use to those who are living? However we do not pledge our organs which are infinitely more valuable and which can save the lives of none persons. Let us do so.

“Angdaan karle maanav, bhagwan ban jaoge”. These beautiful words are part of the lyrics of a song sung by Udit Narayan, with lyrics by Nilesh Bhai Mandlewala, founder and President of Donate Life. It means donate organs so that by gifting life, from man you become GOD. Donate Life is an NGO which has undertaken the noble cause of organ donation, and spreading the need and awareness for organ donation. It has set admirable standards of transparency and commitment for this cause. Nilesh Bhai himself has sacrificed his entire life for life of others and is an inspirational personality. Will write a separate blog on Donate Life and on him only.

Coming back to the cause, we always compare ourselves with western nations. Do we know that we have only 0.5 donors per million population, while the corresponding figure for Spain, USA and Croatia is 36, 27.2, and 35. Can we not try to increase the number? Join us in this mission.

I will end this blog by differentiating between organ donation and full-body donation. Both are noble missions. One is for life, and one is for science. In body donation, the entire body is donated to a medical college for scientific research and for teaching medical students. Two famous persons who have gone in for full body donation are Jyoti Basu and Nanaji Deshmukh. Similarly, many famous persons have gone in for organ donation and taken the pledge. Some of them are Amitabh Bachchan, Priyanka Chopra, Madhavan, Aamir Khan, Salman Khan, Vijay Deverakonda and many others.

We often like to emulate celebrities and famous people. We want to copy their hairstyle, their clothes and their sunglasses. Can we not copy them for their noble decision to go in for organ donation or full-body donation.

Organ donation pledge can be taken by all, rich and poor. If it is taken by an extremely poor person, has he/she not proved that he is extremely rich.

Five lakh persons die every year in India due to lack of donors. For those needing the most precious gift of eyesight. the number increases to ten lakh.

Let us try to address this issue by taking the pledge. We have done so, we request you to do so as well. Let us live a life, afterlife. Love and regards to all.