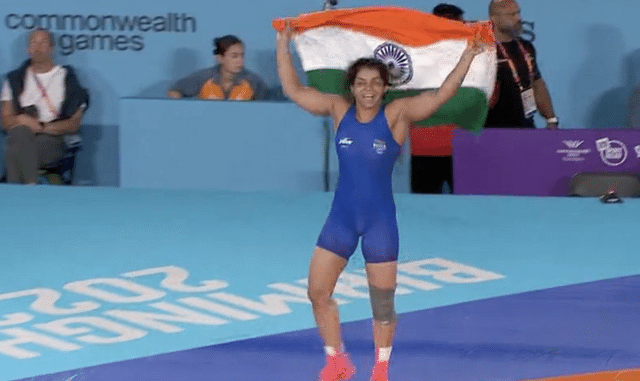 Indian wrestler Sakshi Malik achieved her best ever performance at the Commonwealth Games in style winning Gold in the women’s 62 KG freestyle wrestling final at Birmingham.  This is the second GOLD medal of the day for India at CWG 2022.

Malik clinched the Yellow Metal after pinning down reigning U23 World Champion Ana Godinez of Canada in Final. Though Sakshi Malik was trailing 0-4, she won the gold medal with a great comeback in 20 seconds. It’s the first CWG Gold medal for Sakshi. She had bagged Silver in 2014 and Bronze in 2018.

This is team India’s 8th Gold Medal at the ongoing Commonwealth Games 2022.

What a comeback! @SakshiMalik achieves her best ever performance at the #commonwealthgames in style winning a 🥇 in the women’s freestyle 🤼‍♀️ 62 KG category @birminghamcg22 . This is team 🇮🇳 8th Gold Medal at the ongoing #commonwealthgames2022 . #ekindiateamindia #b2022 pic.twitter.com/E6uA7x8oRX