The 23-year-old edged a high-quality encounter 7-6 2-6 7-6 in three hours and four minutes to become the first Spanish woman to lift the trophy.

She battled back several times on Sunday, digging in after dropping the first set in a tightly-contested tiebreaker. But the 32-year-old Belarussian fell behind early in the final set tiebreaker and couldn’t recover.

Similarly, in the men’s category, Cameron Norrie’s breakthrough season reached a high point in the California desert on Sunday with a 3-6, 6-4, 6-1 win over Nikoloz Basilashvili to become the first Briton to win the ATP Indian Wells title. 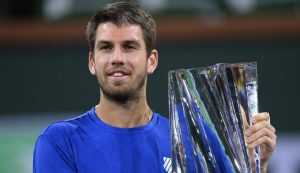 Norrie rallied from a set down to earn his career best 47th win of the seson and is the firts player from Britain to lift the trophy.

Novak Djokovic, Rafael Nadal, Roger Federer, Naomi Osaka and Serena Williams were among those skipping the tournament that was delayed 2 1/2 years because of the coronavirus. The two-week event was hit with a rash of upsets, including top seeds Daniil Medvedev and Karolina Pliskova.

75 Top Destinations In India To Be Developed On…