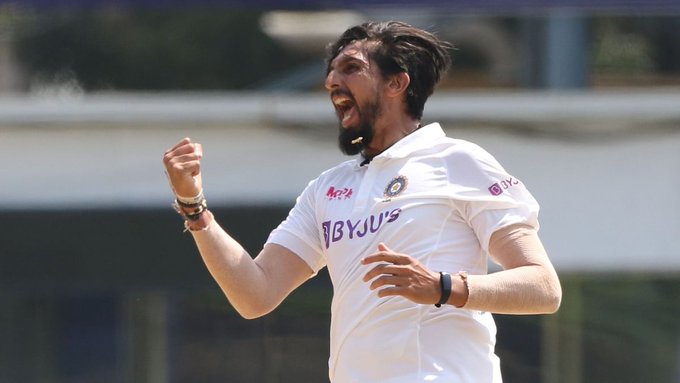 New Delhi: India bowler Ishant Sharma reached a new landmark in his career as he entered the 300 Test wickets club on Day 4 of the first Test against England in Chennai.

The 32-year-old fast bowler then broke into a grin, relief and joy etched on the face as teammates converged to celebrate his 300th Test wicket.

Seeing Ishant bag his 300th scalp in the format, Sunil Gavaskar has highlighted the changes that the lanky speedster has made in his bowling.

“He’s bowling a lot further. He was earlier on bowling maybe around 18 inches shorter and so, therefore, was going past the outside edge, beating the batsmen. It was all looking very good but in the wickets column he wasn’t actually showing results,” Gavaskar said during the tea interval on Day 4 of the first Test against Chennai.

“Now that he’s started doing that in the last 2-3 years, this the kind of dismissals he gets – LBW, with the ball keeping low. The further you bowl, the more you get the opportunity to make the bowl move in the air or off the pitch.”

Playing his 98th Test for India, Ishant bagged three more scalps in the second innings to breach the 300-wicket mark. He had earlier claimed two wickets in the first innings against England at Chepauk.