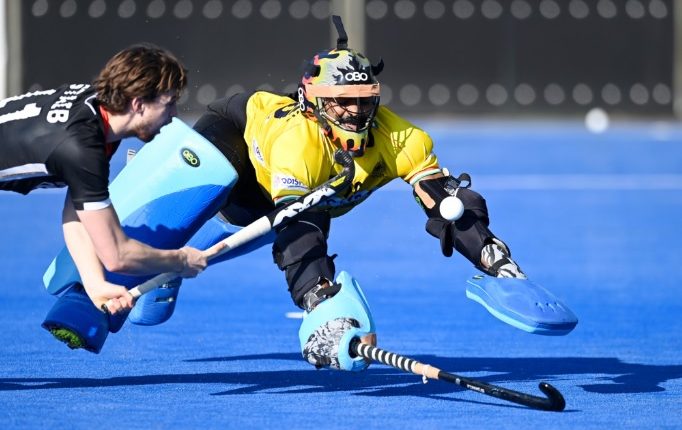 The Bronze Medal at the Tokyo Olympics 2020 ended a 41-year Medal drought for Indian Hockey at the mega sporting event.

The Bronze Medal at the Tokyo Olympics 2020 sparked the resurgence of India as a superpower in world hockey. PR Sreejesh, who played an extremely crucial role for the Indian Men’s Hockey team on their way to the Bronze Medal in Tokyo, recalls the historic campaign fondly, “I cannot believe it has been a year already, as I remember the Tokyo Olympics campaign very clearly. That moment was truly special as it ended the country’s wait of over four decades. Now, the team is poised for bigger feats and definitely we are on the right path.”

India outclassed Germany in a highly entertaining Bronze medal tie that ended 5-4 in India’s favour. “The last few seconds were very close, intense and we even conceded a PC. Thinking of those moments, I have goosebumps,” recalled Sreejesh, as he gears up to stand tall yet again for India at an all-important Semifinal clash at the ongoing Birmingham 2022 Commonwealth Games.

The star goal-keeper went on to say, “We learnt a lot about ourselves as a team at the Tokyo Olympics, which has helped us improve as a squad, and now we are completely focused on the upcoming challenges such as the FIH Odisha Hockey Men’s World Cup 2023 Bhubaneswar-Rourkela and the Paris Olympics 2024, where hopefully we can go even further. But first, our target is on the match tomorrow (Saturday) and we are all set.”

Sreejesh also expressed his gratitude towards Hockey India, Odisha State Government, Sports Authority of India, Ministry of Youth Affairs & Sports as he said, “The professional and structured approach by Hockey India has been one of the major factors for all our recent successes, they have really helped us come leaps and bounds not only as players but collectively as a squad. I hope they continue to support us in the same fashion because that will surely guarantee more medals for India in Hockey. We are all very thankful for the undying support of the Hon’ble Chief Minister of Odisha Shri Naveen Patnaik, who have played such a crucial role of hosting big events in India, helping us gain exposure and I also thank SAI and MYAS for their continued support.”