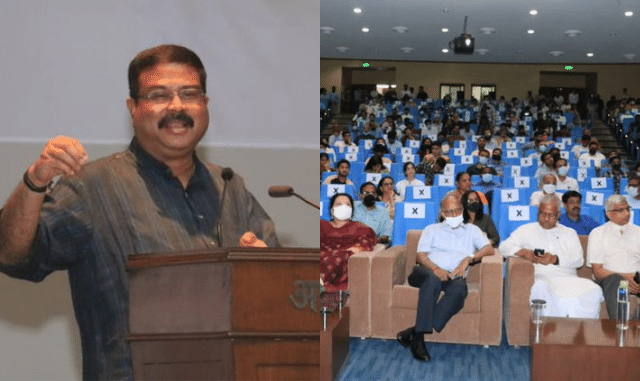 Indian Knowledge System holds solutions to many of the world’s challenges: Dharmendra Pradhan

Dharmendra Pradhan expressed his happiness that the authors have given an academic framework to Indian Knowledge System in this book. Pradhan spoke about the global footprint of Indian knowledge, culture, philosophy and spirituality. He spoke about the ancient Indian civilisation and how it has positively impacted the world. Speaking about Vedas, Upanishads and other Indian texts, he said that our ancient heritage is full of treasures which need to be preserved, documented and propagated. He also spoke about various examples of science-based practices and knowledge from ancient India which we can find relevant still in the modern world.

The Minister said that Indian education system is being decolonised under the leadership of Prime Minister Shri Narendra Modi. While we adopt the good things from our ancient past, we must also be mindful of the problems in our society and build a future which which creates synergy between knowledge from the past and contemporary issues . Solutions to many of world’s problems lie in Indian Knowledge System, he added.

This book seeks to fill in the gap for offering a required course on IKS, recently mandated by AICTE. Moreover, the New Education Policy (NEP) has also provided a clear trajectory for imparting IKS in the higher education curriculum, necessitating a book of this kind in several higher education institutions in the country in the days to come. Although the book has been primarily developed for use by the Engineering institutions, the structure and the contents lend itself easily to address the requirement in other University systems (Liberal Arts, Medicine, Science and Management) for such a book. The newly released IKS textbook will enable the students to bridge the divide between traditional and modern education system  by providing students with an opportunity  to reconnect with the past, build holistic scientific temper and utilize it for carrying multidisciplinary research and innovation.

The textbook curriculum is developed by Indian Institute of Management, Bangalore in association with VYASA Yoga Institute, Bengaluru, and Chinmaya Vishwa Vidyapeeth, Ernakulam. It is written by Prof. B Mahadevan, IIM Bangalore and co-authored by Assoc Prof.  Vinayak Rajat Bhat, Chanakya University, Bengaluru, and Nagendra Pavana R N, with the school of Vedic Knowledge Systems at Chinmaya Vishwa Vidyapeeth, Ernakulam.

The program included welcome address by Prof. A.D. Sahasrabudhe, Chairman, AICTE and Author, Dr. B. Mahadevan, IIM, Bangalore among others. A vote of thanks was provided by Prof. M P Poonia, Vice Chairman, AICTE.

Notably, Indian Knowledge System (IKS), an innovative cell under Ministry of Education (MoE) at AICTE, New Delhi was established in October 2020. IKS seeks to promote interdisciplinary research on all aspects of IKS, preserve and disseminate IKS for further research and societal applications,  actively engage for spreading the rich heritage of our country and traditional knowledge in the field of Arts and literature, Agriculture, Basic Sciences, Engineering & Technology, Architecture, Management, Economics, etc.