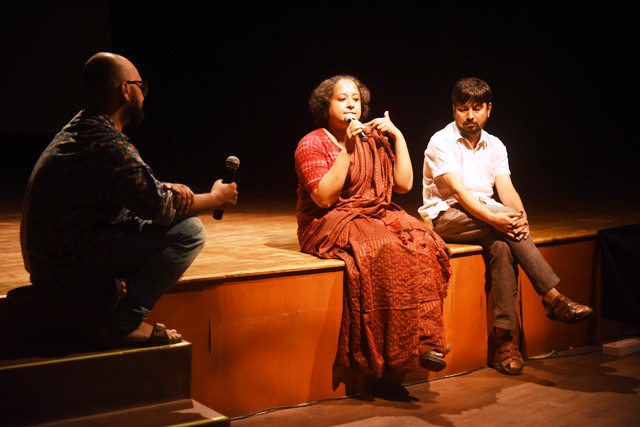 Indian Documentary Film Festival of Bhubaneswar 2022 begins with much fervour

Bhubaneswar: Indian documentary film festival of Bhubaneswar (IDFFB) 2022 started with much fervour as ardent cinema lovers of the city thronged to Odissi Research Centre to witness the critically acclaimed cinema of eminent movie makers around the world.

Organised by Film Soceity of Bhubaneswar (FSB) after a long break, the 3rd edition IDDFB opens with Odia film-maker Lipika Singh Darai’s film ‘Backstage’. The film portrays the lives and times of the puppeteers of Odisha. It documents four forms of puppetry: the glove, the string, the rod and the shadow, which are now performed by the last generations. After them, the art form will probably die. Lipika builds a personal narrative to trace the time a dying art form is going through. The film was selected at various film festivals including 39TH ASOLO ART FILM FESTIVAL, ITALY and the 52nd International Film Festival of India, IFFI. The screening was followed by an interactive session with the director where the audience and the director got to engage in a direct conversation.

On day one, apart from Backstage six other films were also screened. These films are Priya Thuvassery’s City Girls, Joshua Waudros’s Armature, Kasturi Basu and Dwaipayan Banerjee’s Bid for Bengal, Manjul Borah’s Xenophobia and Priya Naresh’s Small Time Cinema. This three-day long festival will continue till Sunday. Cinema and art lovers of the city will go to witness a fantastic documentary by the eminent filmmaker. The venue had two zones for parallel screening.

In zone one, the first day started with Priya Thuvassery’s City Girls which is an intimate portrayal of two young girls from small towns in India now living in Delhi. The has been screened at numerous Film Festivals including IDSFFK 2021, Beyond Borders, South Asian Feminist Film Festival 2021 and DIALOGUES: Calcutta International LGBTQIA Film Festival 2021. Then it was followed by Armature by Joshua Quadros which documents the journey of a Jiu-Jitsu athlete.

On the opening ceremony, director of Colours of Life (Praveen Morchhale), Backstage (Lipika Singh Darai) and A Bid for Bengal (Kasturi Basu and Dwaipayan Banerjee) alongside the convener of the festival Sivapada Swain addressed the audience and talked about the significance of documentary films in the current landscape of cinema and life. They mentioned the importance of making documentaries, its impact on the limited crowd that watches it, the visual hierarchy that is been perpetuated and the types of cinema that exists in the diverse Indian ecosystem. Subrat Behura and Dwaipayan Benerjee also talk about the festival.

The opening film is followed by Bid for Bengal (Bengali) by Kasturi Basu and Dwaipayan Banerjee and Monjul Baruah’s Xenophobia (Ahomia). Both films dealt with the rising right-wing fascism in the country and the consequent effect of it on the socio-political lives of people. Bid for Bengal has been previously screened at IDSFFK and Kolkata People’s Film Festival.

The other films on line which were screened afterwards are:  Small Time Cinema by Priya Naresh, the film follows two Youtube filmmaking groups, one living in Balochistan, Pakistan, and one, in Assam, India. Followed by Colours of Life. In the film the Director, Praveen Morchale, revisits the Himalayan Mountain villages after 5 years of shooting a national award-winning feature film Walking With The Wind in which local villagers appeared. The film was screened at IDSFFK 2021.Then Testimony of Ana by Sachin Dheeraj Munigonda was shown, the film tells the story of an Adivasi elder, accused of witchcraft by her neighbours in rural India, who uses faith and perseverance to survive several monstrous attacks. In a Dissent Manner by Ehraz A Zamanwas the next film. The film examines state brutality at Aligarh Muslim University after the passing of CAA NRC legislation. The last film in Zone one was Hatibondhu by Kripal Kalita, the film is about an eponymous voluntary organization, working for elephant welfare in the districts of Nowgaon & Golaghat districts of Assam.

The audience in Zone two attended two prolonged interactive sessions with the directors. The first one was withPraveen Morchchale, director of Colours of Life. And the second one was with Bid for Bengal’s directors Kasturi Basu and Dwaipayan Banerjee. 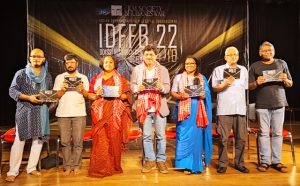