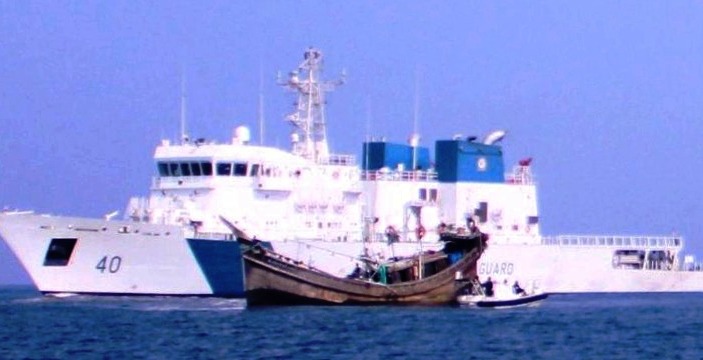 Bhubaneswar: Indian Coast Guard rescued 19 Bangladeshi fishermen who had entered Indian territory in the Bay of Bengal (BoB) on Tuesday.

The Bangladeshi fishermen were stranded in the sea after their boat developed technical snags. They were going without food for nearly 20 days. The Coast Guard ship was dispatched to safely send them to Bangladesh coast.

The press note issued by ICG said that the its aircraft was on operational tasking in the Bay of Bengal last night (December 7) when it noticed a fishing boat in the Indian EEZ.

The boat was contacted on VHF radio, but there was no response from them. The aircraft passed the information to Indian Coast Guard Ship (ICGS) Varad that was deployed in the Bay of Bengal on another operational mission.

Reports said  Varad immediately approached the boat and located the boat in early hours on Tuesday. The boat was identified ‘Rana’ and there are 19 crew members on onboard.

The ICG said the boat had left Coxbazaar (Bangladesh) on November 15 for fishing and remained adrift for long. As no ration was left, the crew was found exhausted. They were provided with first aid, food and water by the Coast Guard ship.

According to the press note, the Bangladesh Coast Guard was requested to make necessary arrangements for taking over the stranded fishing boat along with the crew at a location close to International Maritime Boundary Line.

CCI approves acquisition of shares of OPGC by OHPC