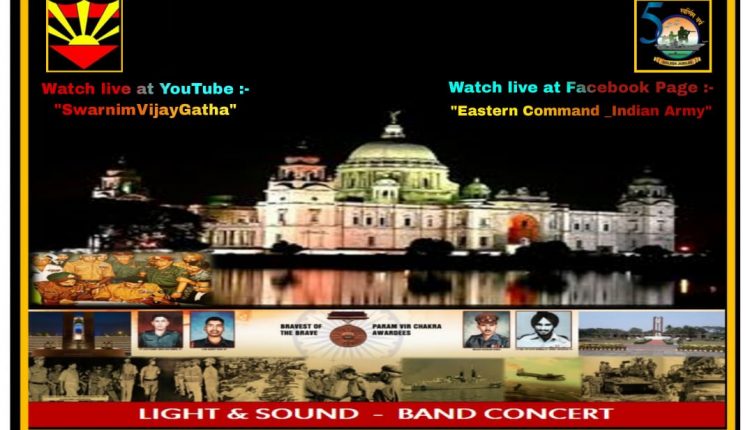 New Delhi: The Indian Armed Forces secured a decisive victory over Pakistan which resulted in the Liberation of Bangladesh in 1971.

It was the largest military surrender after the Second World War and the Indian Armed Forces along with Mukti Bahini liberated Bangladesh in a span of just 13 days.

To commemorate the glorious victory of 1971, the year 2021 was marked as ‘Swarnim Vijay Varsh’ and the Hon’ble Prime Minister had lit the Victory Flame to mark the beginning of Swarnim Vijay Varsh celebrations.

Various events were organised by the Indian Army at many locations in West Bengal and all North-East states throughout the year and now a ‘Swarnim Vijay Gatha’ is being organised at Victoria Memorial, Kolkata on 16th December 2021 which would also mark the culmination of celebrations of Swarnim Vijay Varsh.

‘Swarnim Vijay Gatha’ will showcase a variety of events to include a customised light and sound show on the walls of Victoria Memorial depicting the story of the War of Liberation of Bangladesh.

The symphonic military band of Eastern Command would also perform patriotic and martial tunes with three military and two Jazz bands which will feature 76 musicians participating in the concert.

The ‘Swarnim Vijay Gatha’ will commence at 5:00 pm on 16th December 2021 at Victoria Memorial, Kolkata, and would be aired LIVE on Youtube https://youtube.com/channel/UCChhAAisDNuXHEwE8_ebkSg and Eastern Command Facebook page: Eastern Command_Indian Army.

The event would be graced by War Veterans, senior military commanders, and other eminent personalities including the State and Civil Administration.